What New Attacks Are There? 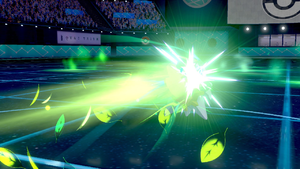 New Pokemon Attacks
Expanding Force: The user attacks the target with its psychic power. This move's power goes up and damages all opposing Pokemon on Psychic Terrain.

Steel Roller: The user attacks the target with its psychic power. This move's power goes up and damages all opposing Pokemon on Psychic Terrain.

Scale Shot: The user attacks by shooting scales two to five times in a row. This move boosts the user's Speed stat but lowers its Defense stat

Meteor Beam: In this two-turn Attack, the user gathers space power and boosts its Sp. Atk stat, then attacks the target on the next turn.

Misty Explosion: The user attacks everything around it and faints upon using this move. This move's power is increased on Misty Terrain.

Grassy Glide: Gliding on the ground, the user attacks the target. This move always goes first on Grassy Terrain.

Rising Voltage: The user attacks with electric voltage rising from the ground. This move's power doubles when the target is on Electric Terrain.

Terrain Pulse: The user utilizes the power of the terrain to Attack. This move's type and power changes depending on the terrain when it's used.

Skitter Smack: The user skitters behind the target to Attack. This also lowers the target's Sp. Atk stat.

Burning Jealousy: The user attacks with energy from jealousy. This leaves all opposing Pokemon that have had their stats boosted during the turn with a burn.

Lash Out: The user lashes out to vent its frustration toward the target. If its stats were lowered during the turn, the power of this move is doubled.

Poltergiest: The user attacks the target by controlling the target's item. The move fails if the target doesn't have an item.

Corrosive Gas: The user surrounds everything around it with highly acidic gas and melts away items they hold.

Flip Turn: After making its Attack, the user rushes back to switch places with a party Pokemon in waiting.

Dual Wingbeat: The user slams the target with its wings. The target is hit twice in a row.

Scorching Sands: The user throws scorching sand at the target to Attack. This may also leave the target with a burn.

Shell Side Arm (Galarian Slowbro): This move inflicts physical or special damage, whichever will be more effective. This may also poison the target.

Jungle Healing (Zarude): The user becomes one with the jungle, restoring HP and healing any status conditions of itself and its ally Pokemon in battle.

Wicked Blow (Single Strike Urshifu): The user, having mastered the Dark style, strikes the target with a fierce blow. This Attack always results in a critical hit.

Surging Strikes (Rapid Strike Urshifu): The user, having mastered the Water style, strikes the target with a flowing motion three times in a row. This Attack always results in a critical hit.

Comments for What New Attacks Are There?