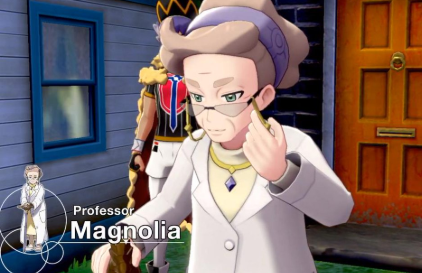 Not too long after beginning your adventure in The Galar Region, you will be tasked to reach Professor Magnolia's house at the end of Route 2. Here, Magnolia will suggest Leon give you and Hop a letter of endorsement so you can take on the Galar Region Gym Challenge. Shortly after he does so, Wishing Stars will fall from the skies above and Magnolia will create a Dynamax Band for both you and hop out of the so you can Dynamax you Pokemon in battles that allow it. Outside of this early Encounter, you won't run into Professor Magnolia all that much during the game due to her age. She will even retire at the end of the game, and Sonia, her granddaughter, will take over as the Galar Region Professor.

Next Page
Who Is Team Yell?
Previous Page
Who Is Sonia?
Top of
Guide
Guide Menu
Verdict:
Very Helpful OK Not Useful
Anything missing from this guide?
ASK A QUESTION for Pokemon Sword and Shield

Comments for Who Is Magnolia?