Who Are Rose & Oleana? 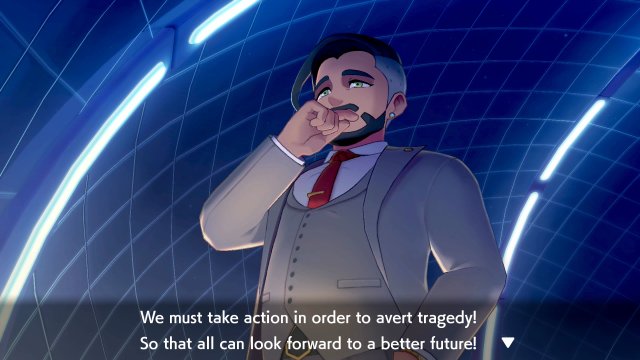 In Pokemon Sword & Shield, there really isn't a true bad guy or group like seen in previous Mainstream Pokemon Games. Team Yell is hardly a threat as an Antagonist Group - much like Team Skull of the 7th Generation - doing no real harm and stopping their mischief any and every time Marnie commands that they stop. If anything, the real antagonist group of The Galar Region is that of Macro Cosmos, head by Chairman Rose himself (with the aid of his Assistant, Oleana). Even then, however, the actions of Macro Cosmos are done with a goal in mind that will actually improve the Galar Region.

As you progress through your journey, you will see Chairman Rose and Olceana on a number of occasions. Rose will usually chat with your character for a few seconds when these encounters occur, before having to get back to his hectic schedule. The further you get in the Main Story, the more Chairman Rose will experience with the Concept of Dynamax (usually shown with a big bang that Leon or Sonia will say they will look into as they insist you stick to your journey). It really isn't until your trainer is challenging the Champion Cup when you start to see Macro Cosmos in a different light.

After the Semi-Finals, your trainer and Hop will go to look for Leon since he was suppose to have dinner with the two of your after your most recent battle. As you begin to do so, Oleana will appear and inform you that Leon is in a meeting with Rose and that they cannot be disturbed. She will then hide the key to Rose Tower with one of her Staff Members, forcing you to find this person three times in Wyndon in order to get to head to Rose Tower. As you and Hop ascend Rose Tower with the main elevator, you will be challenged by a number of Macro Cosmos Grunts (as well as Oleana) on your way to Rose.

Once you reach Rose and Leon, you will hear the two of them discussing a situation. Apparently, Rose knows for a fact that there will be an upcoming energy crisis that will destroy The Galar Region, and it will take place in roughly a thousand years. He believes the the Champion Cup should be put off for now so he and Leon can work to prevent this crisis. Leon assures him that he will help with the crisis immediately after the Champion Cup has concluded. Rose initially agrees to this, but instead moves forward with his plan directly before the Championship Match is set to take place.

Believing it would help prevent the energy crisis, Rose will awaken Eternatus. Unfortunately, he will not be able to control Eternatus to help for the better, and the next version of the Darkest Day will actually begin. After defeating Rose in battle, he will admit his wrongdoing and inform you that Leon has already come to help stop Eternatus. Your trainer will then go to lend Leon a hand, and soon after doing so, you will actually capture Eternatus for yourself. After you do, things will go back to normal. Rose will eventually disappear after his actions backfired on him, but Oleana will tell of you of Rose's gratitude towards your trainer for stopping Eternatus within the Galar Mine after the Main Story.

Later on after defeating the Crown Tundra DLC Story, Peonia will tell you that see saw a woman in the Old Cemetery should you approach her in the Max Liar. By heading there, you will find out that this woman is none other than Oleana. She will mention that she heard a rumor about a person looking like Chairmen Rose, and just as she does, Peony (the person Oleana was referring to) shows up. After a quick chat, you will learn that Peony is actually Chairmen Rose's brother.
Next Page
Who Are Sordward & Shielbert?
Previous Page
Who Is Team Yell?
Top of
Guide
Guide Menu
Verdict:
Very Helpful OK Not Useful
Anything missing from this guide?
ASK A QUESTION for Pokemon Sword and Shield

Comments for Who Are Rose & Oleana?