What Pokemon Have Different Forms? 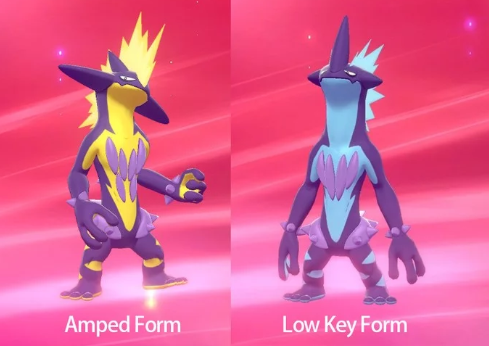 Like all New Pokemon Generations, the 8th Generation sees plenty of new Pokemon having more than one form. Some of these forms won't do much more than change the appearance of a Pokemon, but there are a number that will change a Pokemon's type, stats, and effects. In total, there ten new Pokemon that have more than one form in Pokemon Sword & Shield. There is even one Legacy Pokemon with multiple forms that is also found in the games.

Indeedee: Indeedee has two different forms based upon its gender, but ouside of a difference in appearance, there is nothing significant about the two forms. Indeedee's gender is based upon the game you are playing.

Sinistea & Polteageist: Sinistea and Polteageist are Ghost Type Pokemon that inhabit tea cups as their homes. Unfortunately, most of these tea cups are made of fake materials and are considered forgeries. Only one percent of Sinstea and Polteageist found in the game will have authentic tea cups as homes. Outside of a change in appearance from their Forgery to Non-Forgery Form, the only real difference is the item you must use to evolve Sinstea into Polteageist. The forgeries need the Cracked Pot Item to evolve, while the authentic ones need the Chipped Pot to do so.

Alcremie: Alcremie has 63 Different Forms, and it all depends what Sweet Item a player uses to evolve Milcery into Alcremie. These forms differ greatly in terms of appearance, but that's about it since everything else about Alcremie remians the same from one form to another.

Morpeko: Morpeko has a unique ability called Hunger Switch. This sees it change from its Full Belly Form to its Hangry Form after each and every turn it is in battle. This form change sees Morpeko look incredibly different in appearance, as well as changes the type of its Aura Wheel Attack from Electric when in its Full belly Form to Dark when in its Hangry Form.

Zacian & Zamazenta: Both Cover Legends also have alternate forms, and they solely depend on the item they are holding. If Zacian or Zamazenta are holding the Rusted Sword or Rusted Shield, respectively, they will change into their Crowned Sword or Crowned Shield Forms. If they are holding any other item or no item at all, they each will remain in their Hero of Many Battles Form. Their Crowned Forms see both Zacian and Zamazenta adding the Steel Type to their Base Typing, as well as a boost to their Base Stats.

Rotom: Rotom's many different forms make a return in Pokemon Sword & Shield. However, unlike previous Mainstream Pokemon Games, you don't need to go to a specific place to change Rotom's Form. Instead, simply defeat the man in Wyndon that battles with three different Rotom Forms to receive the Rotom Catalog. This item will allow you to change the form of Rotom to any of its six different forms.

Next Page
What Pokemon Have Galarian Forms?
Previous Page
How To Evolve The New Pokemon?
Top of
Guide
Guide Menu
Verdict:
Very Helpful OK Not Useful

Comments for What Pokemon Have Different Forms?