Pokemon Sword and Shield Walkthrough and Guide by warrior13
Added: Dec 11th, 2019
SWIT
Add Stuff / Ask Questions
Home Guides Pokemon Sword and Shield
Thank you for printing this page from www.SuperCheats.com.Remember to come back to check for updates to this guide and much more content for Pokemon Sword and Shield
Print this pageMore Guides
Next Page
What Weather Is In The Wild Area?
Previous Page
What Is The Wild Area?
When in the Wild Area, you can't spend your PokeDollars on anything outside of leaving your Pokemon at the Pokemon Daycare. Instead, the Wild Area has its own currency known as Watts. You can obtain Watts by interacting with the active Dens scattered across the Wild Area. By touching Dens that are active but don't have a Max Raid Battle, you will receive a small amount of Watts (30-200 Watts). But if you interact with a Pokemon Den that does have an active Max Raid Battle, you will receive a much larger amount of Watts (300-2000 Watts). 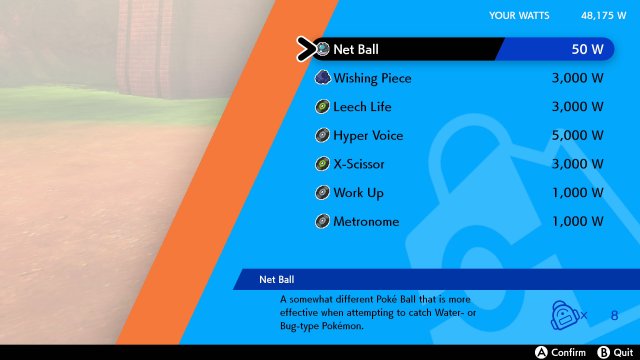 You can spend your Watts on a number of different things in the Wild Area. There are numerous trainers across the Wild Area that will sell you items they found by fishing or on the ground in exchange for 100 Watts, as well as staff members that will sell you Poke Balls (50 Watts), Wishing Pieces (3,000 Watts) and various TRs (Varying Watt Prices). There;s also the Digging Duo that will excavate land for 500 Watts that will give you all the items they find while doing so. There are also Watt Traders that will improve your Bike's Speed for the cost of 1,000, 3,000, and 5,000 Watts. You can even customize your outfit and your camping tent with the use of Watts.

Comments for What Are Watts?