How To Get Keldeo? 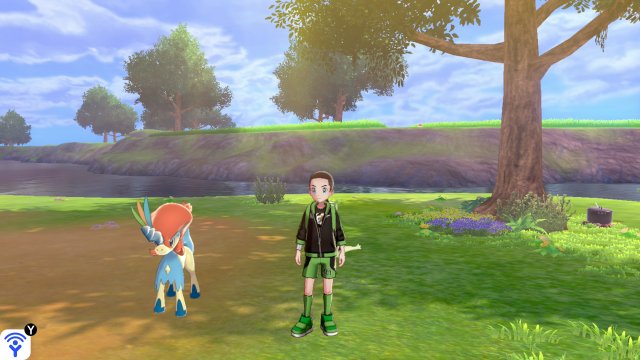 Just outside the town exit of Freezington, you will find a small tree with Footprints under it. As you approach these footprints, Sonia will suddenly appear. After getting reacquainted, she will tell of her theory about three Legendary Pokemon having a secondary home on the Crown Tundra. She will ask that you search the Crown Tundra for the footprints of these three Pokemon, asking for you to return to her in Freezington after you have found all of the footprints for each. There are a total of fifty footprints for each of three Legendary Pokemon in question.

After finding all fifty Footprints for each of the three Pokemon, you can return to Sonia in Freezington to learn of their exact locations. Once you have captured these three Legendary Pokemon - Cobalion, Terrakion, and Virizion - head to Ballimere Lake. If you make a batch of Curry in the pot on Ballimere Lake while having the three Legendary Sword Pokemon in your party, Keldeo will appear. This is the first time that Keldeo, a Mythical Pokemon only previously obtained via Wi-Fi Events, can be found within the Overworld of a Mainstream Pokemon Game.

Keldeo will be at Level 65, knowing the moves Secret Sword, Sacred Sword, Swords Dance, and Hyrdro Pump. Since Keldeo isn't the strongest Pokemon in the Crown Tundra, it is recommended not to use your Master Ball on it. Instead, stick to using Ultra Balls. Keldeo can be weakened for easier captures by lowering its HP and paralyzing it.

Comments for How To Get Keldeo?