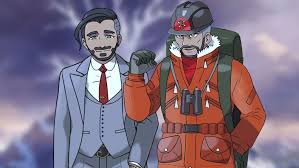 In the Crown Tundra, there are two Main NPC Characters. These two people are Peony and Peonia, a father and daughter, and you will meet the two of them directly after arriving to Crown Tundra. The two will be arguing about how to spend there time in the Crown Tundra, and Peonia will ask for you to step in on her behalf. After doing so, Peony will challenge you to a battle. After the battle ends, Peony will see that Peonia has run off to participate in a Dynamax Adventure.

After going through your first Dynamax Adventure in the Max Lair, Peonia will come up with the idea for you to spend time with her dad doing what he wants while she stays back in the Max Liar and continues playing in Dynamax Adventures. After telling Peony the plan, the two of you will head to the town of Freezington and will begin completing Peony's Adventures. Peony will play a key role in The Sacred Bonds Of Sovereign And Steed Story, but really only as a vessel for Calyrex to communicate with you through. From there, Peony will really only be a placeholder for you to obtain clues for the rest of his little adventures.

After completing all three of his adventures, Peony and Peonia will be permanently found in the Max Liar. Peony will give you some advice on the Legendary Clue you find that he didn't write in the Crown Tundra Story, but that's really about it for his character. He can be battled daily within the Max Lair after this, as well as be found as a participant in the Galarian Star Tournament.
Next Page
Who Is Peonia?
Previous Page
What New League Cards Are There?
Top of
Guide
Guide Menu
Verdict:
Very Helpful OK Not Useful
Anything missing from this guide?
ASK A QUESTION for Pokemon Sword and Shield

Comments for Who Is Peony?