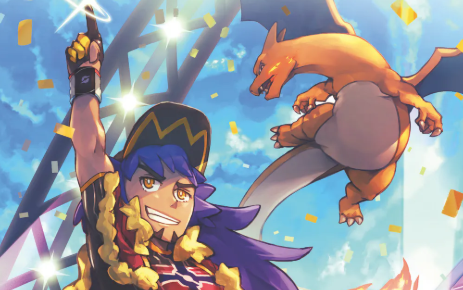 Leon is The Galar Region Champion and brother to Hop, the same who has never lost a single Pokemon Battle in his entire life. Your trainer will first meet Leon when he gifts both you and Hop with your Starter Pokemon, and you will run into him on a number of instances as the Main Story progresses. Usually, you will only run into Leon when Chairman Rose is experimenting with the Concept of Dynamax, where Leon will have to either stop a Pokemon that has Dynamax or investigate a loud bang from what Rose is doing. In each of these encounters, Leon will simply tell your trainer to focus on completing the Gym Challenge.

Eventually, after winning the Champion Cup Semi-Finals, it will be up to your trainer and Hop to ascend Rose Tower in order to find Leon with Chairman Rose. As Rose decides to executes his plan of awakening Eternatus in hopes of preventing the energy crisis from occurring in a thousand years, Leon will be thrown into action once again directly before your Championship Match with him. Leon will ultimately stop Eternatus in its normal form, but he will fail to capture it. Instead, it will be up to your trainer to do so.

Once Eternatus has been stopped and captured, you will finally have your Championship Match with Leon. Defeating him will see your trainer become the next Galar Region Champion and conclude the Main Story. From there, you won't see Leon again until you reach a certain streak at the Battle Tower. When you do, he will battle you in the Battle Tower Format. Should you defeat Leon just once at the Battle Tower, he can be found from there on out as a possible participant if you rematch the Champion Cup (having one of the strongest Pokemon Teams in the entire Galar Region).

Later on after defeating the Crown Tundra DLC, Leon will be a participant at that Galarian Star Tournament. Furthermore, after defeating both the Isle of Armor and Crown Tundra DLC Packages, Leon's Champion Cup Rematch Pokemon Team will see a bump in their levels.
Next Page
Who Is Sonia?
Previous Page
Who Is Bede?
Top of
Guide
Guide Menu
Verdict:
Very Helpful OK Not Useful
Anything missing from this guide?
ASK A QUESTION for Pokemon Sword and Shield

Comments for Who Is Leon?