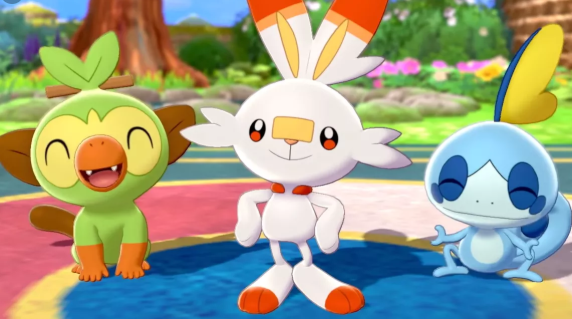 Walkthrough
Pokemon Sword & Shield begin like all other Mainstream Pokemon Games with players selecting their trainer's gender and name before an Introduction to the World of Pokemon takes place. Unlike previous versions, however, Chairman Rose will be getting your trainer acquainted with Pokemon and The Galar Region instead of the local Professor. After he does so, an exhibition match between Leon, the Galar Region Champion, and Raihan, the final Galar Region Gym Leader, will take place. From there, a transition will happen with your trainer actually watching the battle on their Rotom Phone in the living room on their home in Postwick.

Before you know it, Hop, your childhood friend and soon-to-be Rival, will enter your house and mention how the two of you need to be off so you can meet up with with Leon, the same whom just so happens to be the brother of Hop. He'll exit your house, and you will do the same after you grab your bag in the next room. Once outside, you and Hop will notice a Wooloo trying to open the gate to the Slumbering Weald located just to the west of Postwick. After seeing the Wooloo do so unsuccessfully, you and Hop will head to his place. Unfortunately, Leon still hasn't arrived when you do, so Hop suggests heading to the town just north, Wedgehurst, where the Station is located and meet Leon there so he doesn't lose track of things.

When you arrive to Wedgehurst, you will notice people crowding around Leon. Soon enough, Leon will notice you and Hop and the three of you will head back to their house in Postwick since Leon has a gift for both of you. Once at their house, as Hop expected, Leon will give you your choice of Starter Pokemon. Since Hop already owns a Wooloo, he'll let you select first. You'll have the choice between the Grass Starter Grookey, the Fire Starter Scorbunny, and the Water Starter Sobble. After selecting your Starter Pokemon, Hop will select the Starter Pokemon that is weak against yours. From there, Leon will take the Starter Pokemon that is super effective against yours.

After all three of you have selected your Starter Pokemon, you will have dinner with each other. The screen will go black before the following day begins...
Next Page
Postwick Hop Battle
Previous Page
Glastrier & Spectrier Leaked
Top of
Guide
Guide Menu
Verdict:
Very Helpful OK Not Useful

What is the highest level a Pokemon will listen to you after each gym?
Hey. I live in Brasil and I don't have switch online. I've already caught 350 pokemons for my pokedex. There are missing 50 that I can't catch cause..
Pokemon sword and shield gba android cheats
How to catchother trainers Pokemon?
How do I fly in Pokemon Sword/Shield?
How to get zacians held item in Pokemon shield
Anything missing from this guide?
ASK A QUESTION for Pokemon Sword and Shield

Comments for Beginning The Game