Pokemon Sword and Shield Walkthrough and Guide by warrior13
Last Updated: Jun 15th, 2019
SWIT
Add Stuff / Ask Questions
Home Guides Pokemon Sword and Shield
Thank you for printing this page from www.SuperCheats.com.Remember to come back to check for updates to this guide and much more content for Pokemon Sword and Shield
Print this pageMore Guides
Next Page
Final Legendary Trio Pokemon Rumors
Previous Page
Cover Legend Rumors
During the June 2019 Pokemon Direct, it was confirmed that the silhouettes on both the covers of Pokemon Sword & Shield will be two of New Legendary Pokemon. Some fans speculated that the Cover Legends could be the same Pokemon except with Different Forms depending on which version of the game you play, but that will not be the case. Instead, there will be two Cover Legendary Pokemon, each resembling a wolf. 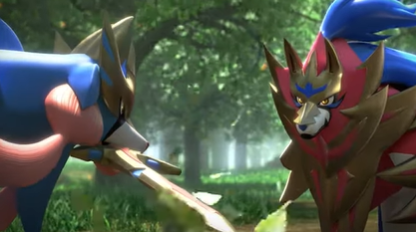 The Cover Legend for Pokemon Sword will be called Zacian, and it carries around a sword within its mouth that is uses to strike foes. On the other, the Cover Legend for Pokemon Shield will be Zamazenta, the same that has a shield for its mane. Most people believe Zacian will be a more offensive Pokemon, while its counterpart, Zamazenta, will be more on the defensive side.