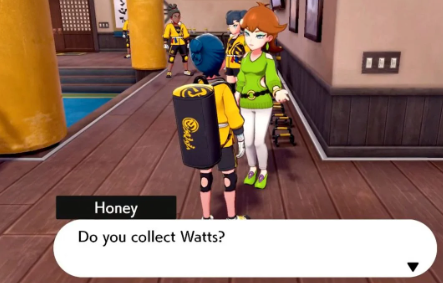 Shortly after arriving on the Isle of Armor, you will be introduced to Honey, the Master Dojo Matron. She will show you the way to the Master Dojo, introducing you to Hyde and Mustard. From there, you won't see Honey again until after you have completed the first of Mustard's three Trials. It is here that Honey will gift you with either a Squirtle or Bulbasaur that will have the ability to Gigantamax once fully evolved. Honey will even have one of the Dojo Students become the New Move Tutor, giving you a few Armorite Ore to use the services of such. Honey will also place on of the Dojo Students as the Max Soup Cehf after you defeat Mustard's second Trial.

After doing these few things for your trainer, Honey won't do much but stay at the Dojo. By speaking with her, she will be willing to Upgrade the Dojo in exchange for some Watts. After giving Honey a certain amount of Watts, she will even offer to bring in strong trainers from other regions. Unfortunately, she won't be able to do so, but she will offer an alternative. Instead of getting other strong trainers, Honey will battle you for herself. And much like the Dojo Master, Mustard, Honey packs quite a punch when in battle.

Next Page
Who Is Mustard?
Previous Page
Who Are Klara & Avery?
Top of
Guide
Guide Menu
Verdict:
Very Helpful OK Not Useful
Anything missing from this guide?
ASK A QUESTION for Pokemon Sword and Shield

Comments for Who Is Honey?