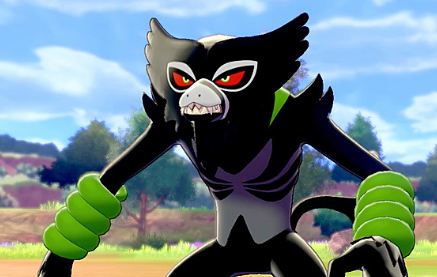 In conjunction with the 2020 Pokemon Movie, Pokemon The Movie Coco, the very first 8th Generation Mythical Pokemon was revealed! This Pokemon is known as the Rogue Monkey Pokemon - which matches its appearance dead on - and will have the name of Zarude. Zarude will be a dual Grass/Dark Type Pokemon, only the third of its kind (Nuzleaf and Shiftry being the other two). It will have the previously known ability of Leaf Guard that will protect it from status conditioning during sunlight within battle, but it will know an exclusive move known as Jungle Healing which will heal both Zarude and its allies HP and status conditioning during battle. Being that it is a Mythical Pokemon, Zarude will only be obtained via a Wi-Fi Event.
Next Page
Galarian Slowpoke & Slowbro
Previous Page
New Legendary Evolution Chain
Top of
Guide
Guide Menu
▼ CommentsVerdict:
Very Helpful OK Not Useful

What is the highest level a Pokemon will listen to you after each gym?
Pokemon sword and shield gba android cheats
How to catchother trainers Pokemon?
How do I fly in Pokemon Sword/Shield?
Anything missing from this guide?
ASK A QUESTION for Pokemon Sword and Shield