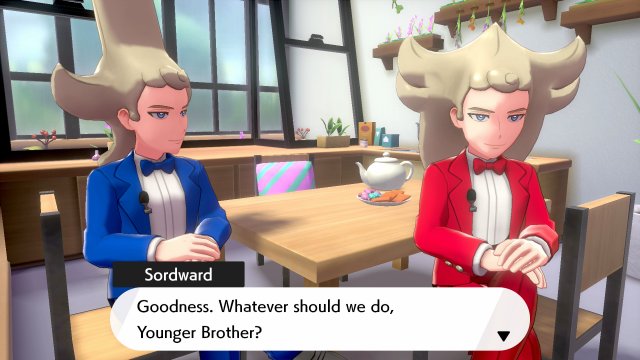 Walkthrough:
After saving the Turrfield, Hulbury, and Motostoke Gym, you will receive a call from Sonia saying that Sordward and Shielbert have arrived at the Pokemon Lab. Once you arrive there, you will learn from the two descendants that they're looking for more Wishing Stars to make even more Pokemon Dyanamax. In hopes of stopping them, you and Hop will face the two of them in a Multi-Battle.

After defeating them, Sonia's new Assistant will reveal that she has been working for the two royal descendants the entire time, handing over to the two of them all the Wishing Stars she was able to obtain while working falsely for Sonia. Sordward and Shielbert will then state that they want to put the entire Galar Region under the control of their royal line again. Their goal is simple: to reveal the true nature of Zacian & Zamazenta to prove their ancestors were the true heroes of the Darkest Day. Before being able to react, the two will then cause Pokemon to Dynamax at the remaining four Pokemon Gyms (Spikemuth is located in an area where the particles to Dynamax cannot be found, thus making its Gym safe from the two).
Next Page
Saving Stow-on-Side Gym
Previous Page
Saving Motostoke Gym
Top of
Guide
Guide Menu
Verdict:
Very Helpful OK Not Useful

What is the highest level a Pokemon will listen to you after each gym?
Pokemon sword and shield gba android cheats
How to catchother trainers Pokemon?
How do I fly in Pokemon Sword/Shield?
How to get zacians held item in Pokemon shield
Anything missing from this guide?
ASK A QUESTION for Pokemon Sword and Shield