How To Get Both Zacian & Zamazenta? 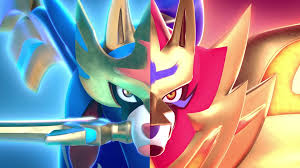 Even though Pokemon Sword & Pokemon Shield were released together, each contain certain Version Exclusive Pokemon that can be found in one game but not the other. This is seen in none other than Zacian and Zamazenta, the Cover Legendary Pokemon for each game, as you can only capture Zacian in Pokemon Sword and Zamazenta in Pokemon Shield. Outside of trading for the other, there seems to be no possible way to obtain both on the same game. However, that isn't the case with the help of Pokemon HOME, at least if you own both Pokemon Sword and Pokemon Shield. By following these simple steps below, you will be able to own both Zacian and Zamazenta, the Kings of The Galar Region, on just one game!

4) Log into Pokemon HOME with the other version and withdraw the Pokemon you just deposited with your other game.

5) Enjoy using both Zacian and Zamazenta within one of your games!
Next Page
How To Get Each Gigantamax Form?
Previous Page
How To Easily Catch Eternatus?
Top of
Guide
Guide Menu
Verdict:
Very Helpful OK Not Useful

Comments for How To Get Both Zacian & Zamazenta?