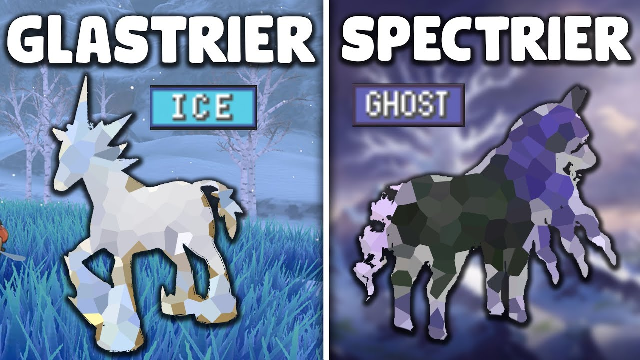 Just days before the Pokemon Sword & Shield Crown Tundra DLC was set to go live, leaks surfaced about two brand New Legendary Pokemon being found in the upcoming coding. These two Pokemon are said to be called Glastrier and Spectrier, each having a special connection to Calyrex. Glastrier is an icicle horse that, unsurprisingly, will be a pure Ice Type Pokemon. Glastrier will have the brand new ability known as Chilling Neigh, which works similarly to the ability Moxie whereas it will boost Glastrier's Attack Stat every time it knocks out foe in battle. As for Spectrier, it will be a pure Ghost Type Pokemon. It will have the brand new ability called Grim Neigh, which has the same effects as Chilling Neigh except that it will raise Spectrier's Special Attack Stat every time it knocks out another Pokemon.

From what was revealed in the leak, players will have the choice between obtaining either Glastrier or Spectrier near the end of Crown Tundra Story, much like they did in the form of Urshafu at the end of Isle of Armor Story. However, there's an added bonus to Glastrier and Spectrier: they are said to be able to "fuse" with Calyrex. Even though this fusion is more of Calyrex simply riding each horse, it causes Calyrex to officially take on a new form. When riding Glastrier, Calyrex will become its Ice Rider Form. When on top of Spectrier, Clayrex will become its Ghost Rider Form. When in these given forms, it is said that Calyrex will have the respective Horse Pokémon’s ability combined with its ability Unnerve (but this has not yet been confirmed as of this writing).

Because of this leak, it is now official that the last of the four stories apart of the Crown Tundra, The Sacred Bonds Of Sovereign And Steed, does in fact revolve around Calyrex. Months ago, we here at SuperCheats correctly predicted this while most fans believed this story had to do with the Swords of Justice.

Next Page
Beginning The Game
Previous Page
The Sacred Bonds Of Sovereign And Steed
Top of
Guide
Guide Menu
Verdict:
Very Helpful OK Not Useful
Anything missing from this guide?
ASK A QUESTION for Pokemon Sword and Shield