How To Get Calyrex Ghost Rider? 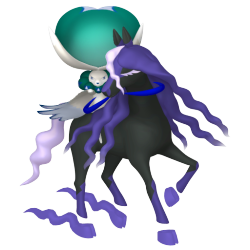 Players will have the opportunity to find and capture Spectrier while undertaking Peony's Legendary Clue #1, the same he calls The Sacred Bonds Of Sovereign And Steed, which focuses around the Legendary Pokemon Calyrex. As players progress with the Legendary Clue #1 Story, Calyrex will eventually ask for players to obtain carrot seeds from one of the townspeople in Freezington. With these seeds in hand, Calyrex will tell of two fields where they can be planted in the Crown Tundra. Depending on the field you choose, the Legendary Horse Pokemon Calyrex use to tame will differ.

If you want to eventually obtain Spectrier, you will need to plant the seed in the Old Cemetery field. After you do, Calyrex will have you harvest a ghostly carrot. Later on in The Sacred Bonds Of Sovereign And Steed Story, Calyrex will then tame Spectrier and you will be able to battle (and this time attempt to capture) Calyrex in its Ghost Rider Form. If caught using this technique, Calyrex will naturally be in its Ghost Rider Form and would stay that way until a player uses the Reins of Unity Key Item to separate Clayrex from Spectrier.

Comments for How To Get Calyrex Ghost Rider?