How To Get The EXP Charm? 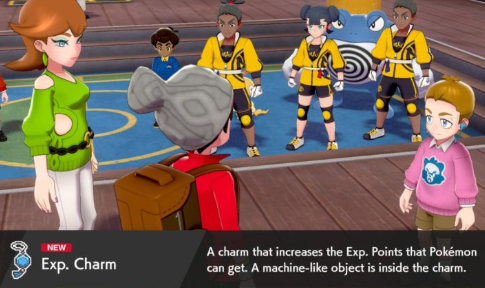 The EXP Charm is one of the few items and features announced when the Isle of Armor was first revealed. Unlike previously released Charm Items, the EXP Charm works in a way similar to that of the EXP Share. You see, the EXP Charm increases the EXP your entire party earns from Battles and Wild Pokemon Encounters. But what's even better about the EXP Charm is that it works in conjunction with the EXP Share, meaning all of your Pokemon earns EXP from each defeated Pokemon but even more than they would before having the charm.

The EXP Charm will come especially in handy if you are looking to train Kubfu the old fashioned way. In order to challenge the Tower of Two Fists, you will need to raise Kubfu all the way up to Level 70. If you don't take the easy way of using EXP Candy to quickly raise Kubfu's Level with practically no effort at all, the EXP Charm will aid in Kubfu earning EXP faster. The quicker Kubfu earns EXP, the faster it will level up and reach that required mark.

Believe it or not, the EXP Charm is one of the easiest items to obtain. How is that, you may ask? Well, because you will actually receive it for doing absolutely nothing at all. After arriving on the Isle of Armor, you will have to battle Klara/Avery. After doing so, you will be able to gain access to the Master Dojo. Once inside it, Honey will introduce you to Hyde. This young man loves to create certain devices, one of which being the EXP Charm. At the end of you conversation with Hyde, you will receive the EXP Charm from him and it will instantly be activated moving forward. It's just that easy!
Next Page
How To Get Armorite Ore?
Previous Page
How To Get The Galarica Cuff?
Top of
Guide
Guide Menu
Verdict:
Very Helpful OK Not Useful

Comments for How To Get The EXP Charm?