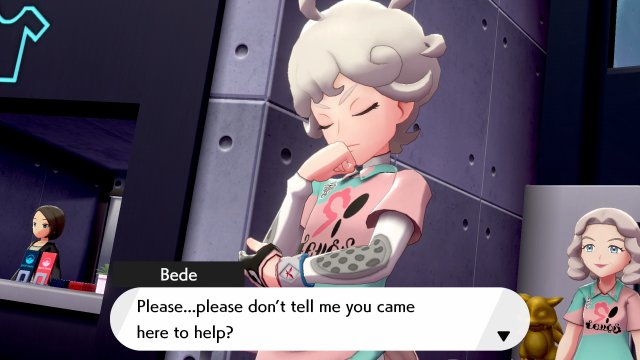 Bede is a Minor Rival found in Pokemon Sword & Shield. You will first run into Bede (who will have a clear attitude) when signing up for the Gym Challenge in Motostoke, but he will not actually introduce himself until he battle's you in the Galar Mine. Much like your trainer, Bede is looking to become the next Galar Region Champion. What makes Bede even more interesting is that his letter of endorsement towards participating in the Gym Challenge was actually given by Chairman Rose himself. However, as the Main Story progresses, you will learn that Rose only did so in order for Bede to collect Wishing Stars for him.

While doing Rose's bidding, Bede will cross paths with your trainer a number of times. When this happens, you will usually have to have a battle against him. Eventually, you will have to stop Bede from destroying the monument found in Stow-on-Side. Defeat him in this battle, and Chairman Rose will appear. Rose will be upset that Bede took one of his own Pokemon to destroy a historic site. Even though Bede will express he was doing the right thing, Rose will disqualify Bede from the Gym Challenge and will send him back to Hammerlock.

After defeating the Gym Leader Opal, she will offer to take you back to Hammerlocke. Once there, you will again run into Bede. He believes your trainer is only there to make fun of him while at rock bottom, but he also thinks Rose might let him rejoin the Gym Challenge if he goes to him. Opal will notice Bede and will be impressed by how pink he is, and she'll offer to take him under her wing in order to help him. He will agree, and the two of them will return to Ballonlea.

You won't see Bede again until directly before the Champion Cup Finals take place, where he'll insist on battling you once again. If he loses the battles, he'll pledge to give up being a Pokemon Trainer. However, after defeating, the fans will cheer for Bede and express that he should just restart his career. He'll agree to do so, hoping to become the next Fairy Type Gym Leader of Ballonlea.

From there, you won't see Bede again until the Poke Game Story when you head to the Ballonlea Gym to stop the Dynamax Pokemon caused by Sordward and Shielbert. He'll tell your trainer that he already defeated the Dyanmax Pokemon by himself, being he is the new Gym Leader of Ballonlea now that Opal has retired. He'll challenge you to one final battle, and after being defeated once more, Bede can only be found as one of the possible participants when rematching the Champion Cup.

Later on after defeating the Crown Tundra DLC, Bede will be a participant at that Galarian Star Tournament. Furthermore, after defeating both the Isle of Armor and Crown Tundra DLC Packages, Bede's Champion Cup Rematch Pokemon Team will see a bump in their levels.
Next Page
Who Is Leon?
Previous Page
Who Is Marnie?
Top of
Guide
Guide Menu
Verdict:
Very Helpful OK Not Useful
Anything missing from this guide?
ASK A QUESTION for Pokemon Sword and Shield

Comments for Who Is Bede?