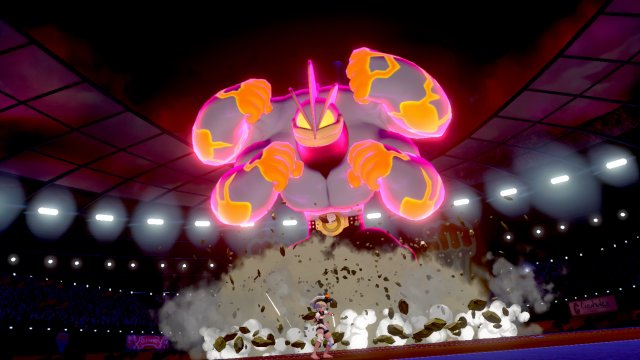 Gym Mission
The fourth Pokemon Gym in Pokemon Sword is found in Stow-on-Side, and its a Fighting Type Gym. The Mission for this Pokemon Gym sees players having to slide down a slope in order to reach the Gym Stadium. Players will need to use the Control Stick on their Nintendo Switch to move left or right while sliding down the slope, using the various punching gloves to maneuver across the area. You will battle trainers from one slope to the next.

Gym Stadium
After defeating the Mission, you will go on to face the Gym Leader, Bea. Like the Pokemon Gym, she is a Fighting Type Trainer. She has four different Pokemon, and the final one she'll send into battle, Machamp, will have the ability to Gigantamax.

By defeating Bea, you will earn the Fighting Badge. With it, you will have the ability to catch Pokemon up to Level 40. You will also receive TM42 (Revenge) and the Fighting Uniform.