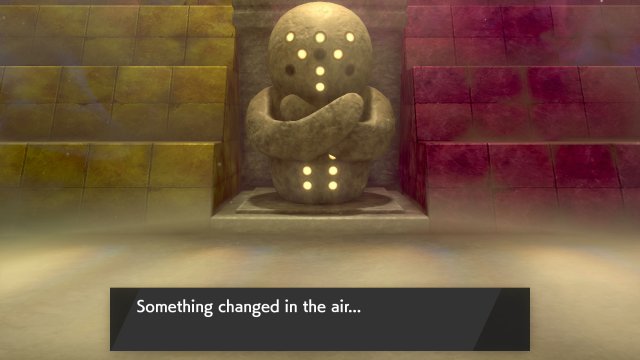 Players will have the opportunity to find and capture Regidrago while undertaking Peony's Legendary Clue #2, the same he calls The Terrible Titans... Lurking Locked Away, which focuses around the Regi Legendary Pokemon. Regidrago can be found in the Split-DecisiRuins, and this temple can be found in the Three-Point Pass Wild Area. Like all the Regi Temple Ruins, this one, as well, will be locked. In order to open the Split-DecisiRuins, all you must do is have Regice, Registeel and Regirock in your party.

Unlike the previous Regi Temple Ruins, this one is a little different. As you enter the temple, it will zoom on the pattern sign on the top of the temple. Take note of this because it will come in handy after entering the temple ruins. Once inside, you will see more circular tiles than usual. This is because you have two possible Regi Legendary Pokemon to find in this temple, but you can only capture one. The one you find is dictated by the titles you choose to light up. If you light the top two tiles on the left side, the top two tiles on the right side and the top tile and two bottom tiles in the middle row, you will go into battle against Regidrago when you click on the statue.

Regidrago will be at Level 70, knowing the moves Dragon Energy, Dragon Claw, Hammer Arm, and Laser Focus. Since Regidrago isn't the strongest Pokemon in the Crown Tundra, it is recommended not to use your Master Ball on it. Instead, stick to using Ultra Balls. Regidrago can be weakened for easier captures by lowering its HP and paralyzing it.

Comments for How To Get Regidrago?