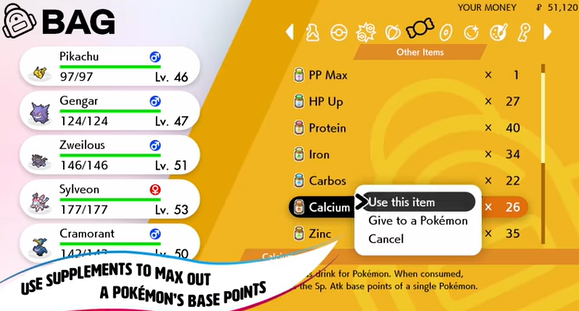 Vitamins really only work on Lower-Leveled Pokemon, mainly because their Effort Values aren't already as high as they are going to be. Vitamins will be absolutely ineffective on Fully Leveled Pokemon, which are Pokemon that have reached Level 100 and usually have maxed out Effort Values. In total, there are six different Vitamins, one for each Base Stat Category for a Pokemon: HP Up (Raises Hit Point Stat), Protein (Raises Attack Stat), Iron (Raises Defense Stat), Calcium (Raises Special Attack Stat), Zinc (Raises Special Defense Stat), and Carbos (Raises Speed Stat). Vitamins can be found randomly in battle, but, most notably, they can be purchased from the Battle Points Shop in Hammerlocke and the Pokemon Center PokeMart in Wyndon.

Comments for What Are Vitamins?