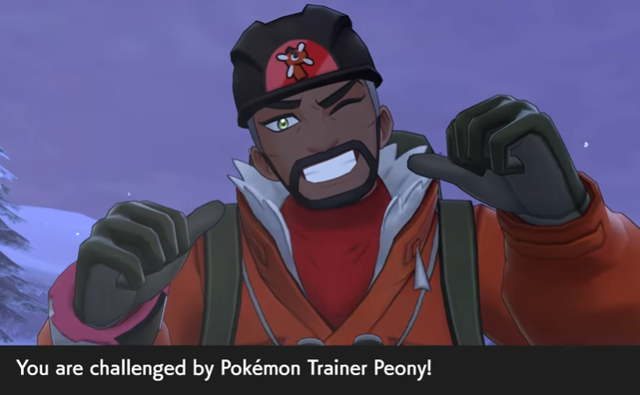 After taking the train to the Crown Tundra, you will arrive in the Slippery Slope. Immediately after leaving the Train Station, you will run into a father and daughter arguing. The father, whose name you will learn is Peony, has many adventures planned for him and his daughter; however, she, whose name is Peonia, is interested in going on Dynamax Adventures instead. After arguing for a moment, Peonia will ask your trainer to step in. But by doing so, Peony will challenge you to a battle.

After defeating Peony in battle, he will notice Peonia had left during the battle. He leaves in hot pursuit of her, knowing Dynamax Adventures take place in the Max Lair not so far away (still within the Slippery Slope area). By heading there next, you will see Peony arguing with a scientist to enter a Dynamax Adventure. After being told of the dangers, Peony will bypass the scientist and head in. Of course, you will go in after him.

After completing your first Dynamax Adventure, Peonia will arrive and ask for you to participate in the adventures her dad originally had in store for her. From there, you will quickly find Peony lying in defeat in the center of the Max Lair main area. After explaining to him that you would like to participate in his adventures, he will become overjoyed and will ask for you to follow him to the town not too far away called Freezington.