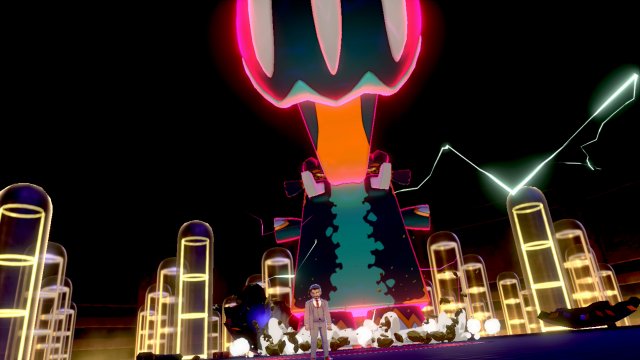 After both you and Hop obtain the Rusted Sowrd & Rusted Shield from the Altar in Slumbering Weald, you will proceed to helping Leon by heading to the Energy Plant in Hammerlocke. Once there, Oleana will appear and express her concern when it comes to Rose. He has awakened the Pokemon known as Eternatus, the same who is producing a large amount of Dynamax Eneergy that is causing Wild Pokemon throughout The Galar Region to Dynamax for themselves. She concludes by asking you to save Rose.

Once you reach Rose, he will question what your trainer is doing there. He'll explain that he awoke Eternatus to help prevent the upcoming energy crisis, stating that he has been feeding Eternatus Wishing Stars in order to produce more Galar Particles to do so. Unfortunately, he lost control of Eternatus, needing Leon to help him now do so. He will then challenge you to a battle. (His Copperajah will Gigantamax when sent into battle.)

After defeating Rose, he will apologize for ruining the Gym Challenge (even though he'll insist the upcoming energy issue had to be dealt with immediately). He'll think that Leon must've captured Eternatus by now, urging you to go up to the top of the Energy Plant to see for yourself.