Pokemon Sword and Shield Walkthrough and Guide by warrior13
Added: Aug 11th, 2019
SWIT
Add Stuff / Ask Questions
Home Guides Pokemon Sword and Shield
Thank you for printing this page from www.SuperCheats.com.Remember to come back to check for updates to this guide and much more content for Pokemon Sword and Shield
Print this pageMore Guides
Next Page
A Third Mystery Pokemon?
Previous Page
Another Mystery Pokemon?
Since Pikachu's rise to fame in the Pokemon Franchise, the creators at GameFreak have tried to recreate that same magic by introducing new Poekmon that are very similar to the Electric Mouse Pokemon. From PikaBlue (Marill) to Dedenne, GameFreak has made a number of variants of Ash's Faithful Partner in hopes a striking it big once again. And now with the 8th Generation of Pokemon being introduced within Pokemon Sword & Shield, the next version of Pikachu has come with the reveal of another new Galar Region Pokemon with the name of Morpeko. 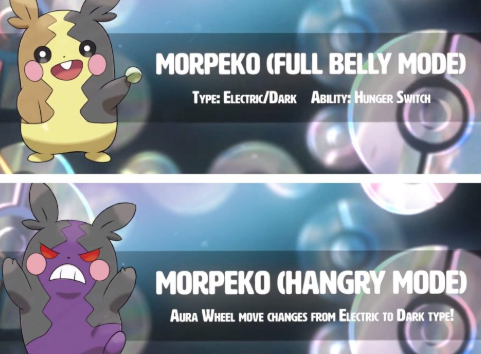 At first glance, Morpeko looks very, very similar to Pikachu. However, it comes with a twist, found nowhere else than in its ability. Morpeko has a new ability called Hunger Switch, where it changes forms depending on its level of hunger (or so it seems). Morpeko is an Electric/Dark Type Pokemon, and it has an exclusive move called Aura Wheel. When in its normal form, Morpeko's Aura Wheel will be an Electric Type Attack. However, when it's Hangry Form, this move will be a Dark Type Attack.

Next Page
A Third Mystery Pokemon?
Previous Page
Another Mystery Pokemon?
Top of
Guide
Guide Menu
Verdict:
Very Helpful OK Not Useful
Anything missing from this guide?
ASK A QUESTION for Pokemon Sword and Shield