How To Defeat Bede In Interruption? 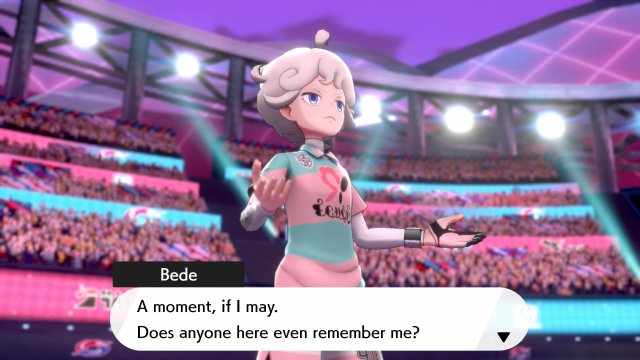 After defeating all eight Pokemon Gyms and signing up for the Champion Cup, you will have to win two Semi-Final Matches before being able to advance to the Finals Tournament of the Champion Cup. After defeating both Marnie and Hop in the Semi-Finals and retrieving Leon from Rose Tower, you will proceed to the Champion Cup Finals. However, directly before the Finals commence, Bede will appear and challenge you to a battle. Since being taken under Opal's tutelage, Bede now specializes in using both Psychic & Fairy Type Pokemon. In this battle, he will use four different Pokemon, three of which will dual Psychic/Fairy Types. Because of this, Bede is especially weak against Steel & Ghost Type Pokemon & Attacks.

Additionally, all of Bede's Pokemon will either be at Level 51, Level 52 or Level 53. Due to this, it would be wise to have all of your Pokemon at Level 55 or higher. The more experienced your Pokemon are, the easier it will be to defeat Bede. And finally, Bede will Gigantamax his final Pokemon, which just so happens will be Hatterene. Because of this, it would be especially wise to wait to use your Dynamax until he sends out Hatterene. Also, it would be smart if the Pokemon you Dynamax is either a Steel Type, Ghost Type, or Poison Type, since Bede's Hatterene will be extremely weak to those type of attacks.

Comments for How To Defeat Bede In Interruption?