What Are Pokemon Marks?

Pokemon Sword and Shield Walkthrough and Guide by warrior13
Last Updated: Dec 19th, 2019
SWIT
Add Stuff / Ask Questions
Home Guides Pokemon Sword and Shield
Thank you for printing this page from www.SuperCheats.com.Remember to come back to check for updates to this guide and much more content for Pokemon Sword and Shield
Print this pageMore Guides
Next Page
How To Obtain The Master Ball?
Previous Page
What Are Brilliant Auras?
As you travel through The Galar Region, there will be a chance that a Wild Pokemon will have a Pokemon Mark when caught. Pokemon Marks act a lot like Pokemon Ribbons do, being found in a Pokemon's Summary Page and having the ability to be attached to a Pokemon. Wild Pokemon can have Pokemon Marks naturally, but certain Pokemon Marks have a higher chance of being found on a Wild Pokemon when said Pokemon is captured in a certain place or during a certain time of day. 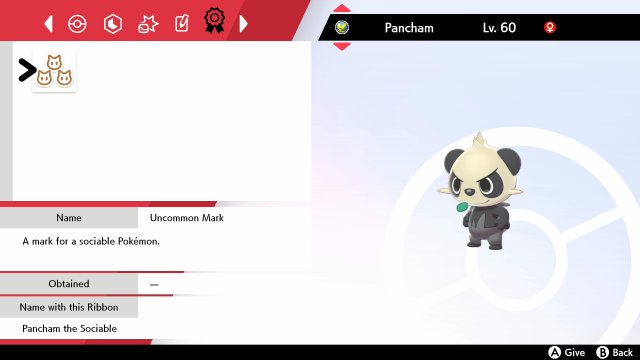 Unfortunately, Pokemon Marks don't really have that many effects to them. Actually, the only thing they really do is give a Pokemon a tagline when sent into battle with Pokemon Marks attached to them. Each Pokemon Mark will look different in a Pokemon's Summary Page, so it comes at no surprise that each have a specific tagline they give to a Pokemon.

Next Page
How To Obtain The Master Ball?
Previous Page
What Are Brilliant Auras?
Top of
Guide
Guide Menu
Verdict:
Very Helpful OK Not Useful

Comments for What Are Pokemon Marks?