How To Give Pokemon Egg Moves?

Pokemon Sword and Shield Walkthrough and Guide by warrior13
Last Updated: Nov 20th, 2019
SWIT
Add Stuff / Ask Questions
Home Guides Pokemon Sword and Shield
Thank you for printing this page from www.SuperCheats.com.Remember to come back to check for updates to this guide and much more content for Pokemon Sword and Shield
Print this pageMore Guides
Next Page
How To Access PC Boxes?
Previous Page
What Daily Events Are There?
Egg Moves have existed since the 4th Generation of Pokemon. These are special moves that a species of Pokemon can only learn when one of the breeding parents has the move to pass down to the Egg Pokemon. Until Pokemon Sword & Shield, Egg moves could only be given to the Egg Pokemon. But not anymore! Now, Eggs Moves can also be passed from one of two compatible Pokemon to the other when placed in the Pokemon Daycare together! No longer will players have to breed to get all the perfect moves on a Pokemon, but instead will only need to momentarily place two Pokemon in the Daycare at the same time for the same affect! 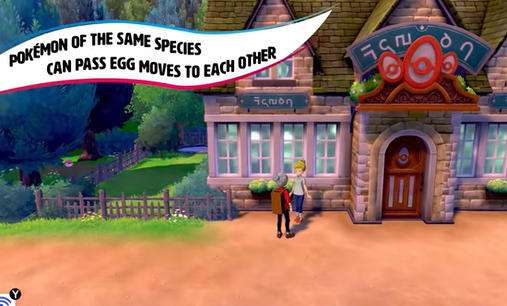 In order to pass egg moves from one Pokemon another, simply place each of them (the one that knows the Egg Move and the one you will would like to learn it) in the Pokemon Daycare or Pokemon Nursery. Make sure both Pokemon are compatible with each other before placing them at either facility, and remember to have at least one empty move slot on the Pokemon you would like to receive the Egg Move. From there, it should only take a few minutes before the Egg move has successfully be passed from the one Pokemon to the other!

Next Page
How To Access PC Boxes?
Previous Page
What Daily Events Are There?
Top of
Guide
Guide Menu
Verdict:
Very Helpful OK Not Useful

What is the highest level a Pokemon will listen to you after each gym?
How do you get the rusted sword in Pokemon shield
How do I 'inspect cartographers conundrum'?
How to get cheat codes
How to get nature mints?
How do you collect the spot by the meet up spot
How to get infinte master balls
Anything missing from this guide?
ASK A QUESTION for Pokemon Sword and Shield

Comments for How To Give Pokemon Egg Moves?