They Came From The Ultra Beyond

After completing all three of Peony's adventures (including The Sacred Bonds Of Sovereign And Steed, The Terrible Titans... Lurking Locked Away, and A Legendary Tree Of A Legendary Three), his daughter, Peonia, will arrive at the base camp in Freezington. The two will start to chat, ultimately ending with both heading back to the Max Liar to participate in Dynamax Adventures. This concludes the Crown Tundra Story; however, the adventures are not done yet!

Once the screen returns to the game, you will see something shining on the ground at the front door. By picking it up and viewing it, it will appear to be another Legendary Clue written by Peony. It will be hard to make out what it says, so you will need to go ask Peony what it means. He won't know exactly what the note is if you bring it to him at the Max Liar as he didn't write it down, but he's able to make out enough to know it has something to do with the Unova Region Ultra Beasts. From there, he gives this newest adventure a name for itself: They Came From The Ultra Beyond.

Though it's difficult to know what to do in order to complete the adventure, it's actually pretty simple. In essence, all you must do is participate in Dynamax Adventures until you come across and capture Necrozma. It might takes some time, but that's all that it takes to complete this adventure. After capturing Necrozma through a Dynamax Adventure, head over and show it to Peony. By doing so, he will say that you have officially finished this final adventure. After checking off the note, the scientist of the Max Liar will walk over and tell that it was actually her note. As a reward, she will gift you with an Ability Patch. 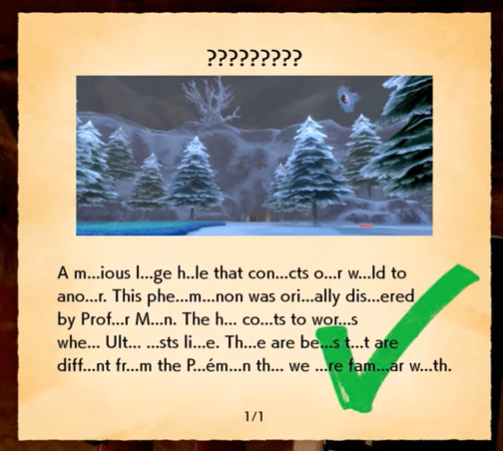 Click Here To Learn All About Professor Sonia's Research Mission!

Comments for They Came From The Ultra Beyond