Which Urshifu Form Is The Best? 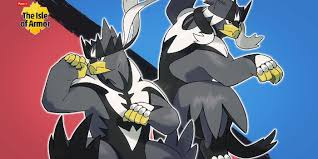 As players progress through the Isle of Armor DLC for Pokemon Sword & Shield, they will ultimately need to decide with Urshifu Form they would like their Kubfu to evolve into. By eventually taking the path of the Tower of Darkness, Kubfu will evolve into Single Strike Urshifu (a Fighting/Dark Type Pokemon). By taking the path of the Tower of Waters, Kubfu will instead evolve into Rapid Strike Urshifu (a Fighting/Water Type Pokemon). Most players will look to get the form that is better overall, which begs to question which form that happens to be.

One of the positives for Single Strike Urshifu is that Dark Type Pokemon aren't all that common; however, they are only super effective against Ghost Types and Psychic Types. It also isn't such a good thing that Single Strike Urshifu is a dual Fighting/Dark Type as that makes it x4 weak to Fairy Type Pokemon & Attacks (which are commonly used these days). That said. Single Strike Urshifu actually has the stronger Exclusive Move of Wicked Blow, which ends up having a Base Power of 180 after factoring in the Same Type Advantage Boost and Critical Hit Boost. Couple that with Close Combat, another move that will ultimately have a Base Power of 180 for Urshifu, and you have one hard hitter on your hands.

Then there is Rapid Strike Urshifu, whose dual Fighting/Water Typing sees it not x4 weak to any other Pokemon or Attack. However, there are plenty of good Water Types in Galar Region, which takes a bit away from it. Another notch in the belt of Rapid Strike Urshifu is that its Exclusive Move of Surging Strikes is a tad weaker than Single Strike's Wicked Blow, only coming it at roughly 170 base Power after all the same boosts. That said, Surging Strikes hits multiple times, destroying Sturdy Ability Pokemon and Focus Sash Users. Rapid Strike Urshifu also has the benefit of learning Close Combat.

So which Urshifu is better? Honestly, both are about the same in terms of pros versus cons. Rapid Strike is just a tad less powerful, but it doesn't have a x4 weakness and it can Break through certain Pokemon that Single Strike can't. Ultimately, it's up to the player to decide which they prefer, as both are incredibly Strong Pokemon.

Comments for Which Urshifu Form Is The Best?