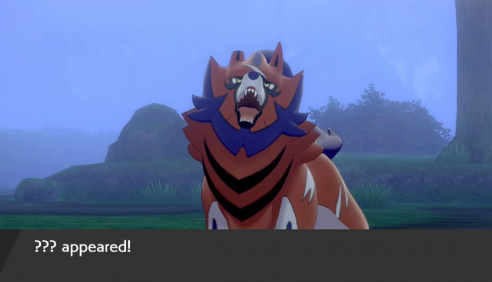 After defeating Hop in your first official battle, Leon will heal both of your Pokemon before reminding both you and Hop to retrieve a Pokdex from the Professor at the Lab in Wedgehurst. Hop will suggest telling your mom that your journey has now begun, and on your way back to your house, you will notice that the Wooloo from the day before actually broke through the gate and had fled into the Slumbering Weald. Hop will soon arrive, and the two of you will will then proceed with trying to find the Wooloo.

As you proceed through the first portion of Slumbering Weald, a number of Wild Pokemon will appear and force you to go into battle with. Since you don't know how to catch Pokemon, you'll have to simply defeat these three Pokemon. After doing so, you and Hop will continue into the deeper fog. Soon, the fog will become so thick that the two of you will barely be able to see each other. When this happens, the Cover Legend Zacian (Sword) or Zamazenta (Shield) will appear. With no other idea, your trainer will go into battle with it. However, your Pokemon's Attack will do absolutely nothing, and the battle will end with the Cover Legend disappearing into the fog after three turns.

You and Hop will black out for a moment after this Encounter, but you will be awaken by Leon. He and his Charizard have saved the missing Wooloo, and Hop will attempt to tell him what happened. But since the Cover Legend (which isn't known to be such at that given time) is no where in sight, you and Hop will continue with your adventure. You must do so by first telling your mom, and then heading towards Route 1 just north of Postwick.