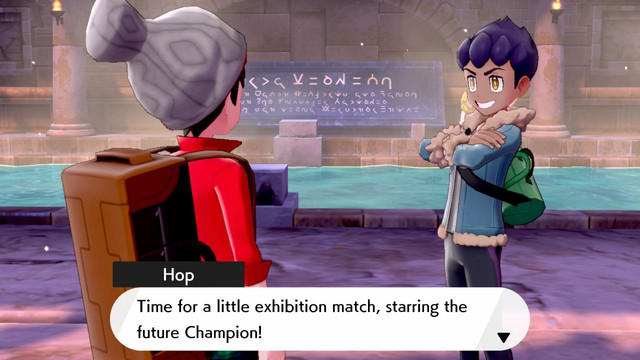 Hop is the Main Rival found in Pokemon Sword & Shield. Like many previous Mainstream Pokemon Games, Hop also happens to be your friend from the same hometown as your trainer. As an added bonus, Hop is the younger brother of Leon, who just so happens to be The Galar Region Champion. And it is actually Leon who will gift both your and Hop with your Starter Pokemon. Similar to other Mainstream Pokemon Games as of late, Hop will journey through the Galar Region with the Starter Pokemon that is weak against yours.

When beginning his journey, Hop's only goal will be to become strong than even his own brother so that he can become the next Galar Region Champion (hopefully by giving his brother his very first loss in battle). However, as the Main Story progresses and he continuously loses to your trainer (as well as others, like Bede) in battle, Hop will become unsure on if being a Great Pokemon Trainer is truly in his cards. He will even mix up his Pokemon Team a number of times in hopes of becoming a better trainer.

Despite this feeling, however, Hop will keep at it and make his way all the way to the Champion Cup Semi-Finals. Unfortunately, it will come down to both you and Hop having to face in battle once again in order to earn the right to move onto the Finals. After defeating him once more, Hop's goal of defeating his brother to become the next Galar Region Champion will fade. However, he will still be happy for your trainer, hoping that you will be the one to finally defeat Leon.

After losing to you Champion Cup, Hop will search to find himself and what he would one day like to be. He will battle you to begin the Post Game Story, as well as help your trainer defeat the Dynamaxing Pokemon across The Galar Region at the hands of Sordward and Shielbert. Hop will even capture the Cover Legendary Pokemon of the opposite verion of the game at the end of the Post Game Story, but after losing to your trainer in one final battle after he does, Hop will finally know what he would like to be: a Pokemon Professor.

He will inform both your and Sonia of this, and it's actually Sonia who offers him to become her new Assistant so her can learn how to properly become a Pokemon Professor one day. He'll agree, and from there on out, he will be found in the Wedgehurst Pokemon Lab. But he will, however, be found as one of the participants should trainers look to rematch the Champion Cup in Wyndon. And if battled there, Hop will own one of the strongest Pokemon Teams in all of The Galar Region.

Later in the Isle of Armor DLC, Hop will help your character find the necessary ingredient so you can give your Urshafu its Gigantamax Form. After defeating the Crown Tundra DLC, Hop will be a participant at that Galarian Star Tournament. Furthermore, after defeating both DLC Packages, Hop's Champion Cup Rematch Pokemon Team will see a bump in their levels.
Next Page
Who Is Marnie?
Previous Page
Where Is The Dynamax Adventure Shop?
Top of
Guide
Guide Menu
Verdict:
Very Helpful OK Not Useful
Anything missing from this guide?
ASK A QUESTION for Pokemon Sword and Shield

Comments for Who Is Hop?