Which New Attacks Are There? 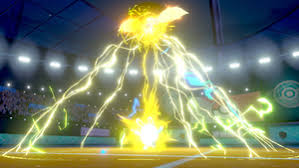 Since the Crown Tundra introduces loads of brand New Pokemon and Galarian Forms, it comes as no surprise that there are a handful of brand New Pokemon Attacks as well. Of course, each of these moves are exclusive to the brand new Pokemon and Galarian Forms being introduced. In all, there are eight brand new Pokemon Attacks within the Crown Tundra, all of which will be known by the Pokemon they are exclusive to when captured or evolved into.

New Pokemon Attacks
Thunder Cage (Regieleki): The user traps the target in a cage of sparking electricity for four to five turns.

Dragon Energy (Regidrago): Converting its life-force into power, the user attacks opposing Pokémon. The lower the user's HP, the lower the move's power.

Freezing Glare (Galarian Artiucno): The user shoots its psychic power from its eyes to Attack. This may also leave the target frozen.

Thunderous Kick (Galarian Zapdos): The user overwhelms the target with lightning-like movement before delivering a kick. This also lowers the target's Defense stat.

Fiery Wrath (Galarian Moltres): The user transforms its wrath into a fire-like aura to Attack. This may also make opposing Pokémon flinch.

Now that you know about the brand new Crown Tundra Pokemon Attacks, Click Here to learn about the new Crown Tundra Pokemon Abilities!
Next Page
Which New Abilities Are There?
Previous Page
Which New Gift Pokemon Are There?
Top of
Guide
Guide Menu
Verdict:
Very Helpful OK Not Useful
Anything missing from this guide?
ASK A QUESTION for Pokemon Sword and Shield

Comments for Which New Attacks Are There?