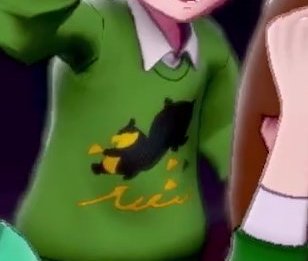 During the June 2019 Pokemon Direct, a number of brand New Pokemon were revealed that will make their debut in Pokemon Sword & Shield. However, believe it or not, there was also a Hidden Pokemon not officially revealed also found in the trailer. This Pokemon was seen in the crowd of fans at the Pokemon Gym Footage, as well as designed on a number of shirts other trainers were wearing. not much is know at this time about this Pokemon, except that it resembles a squirrel.
Next Page
More New Pokemon: Yamper & Impidimp
Previous Page
Main Bird Pokemon: Corviknight
Top of
Guide
Guide Menu
Verdict:
Very Helpful OK Not Useful

Comments for A Hidden New Pokemon?