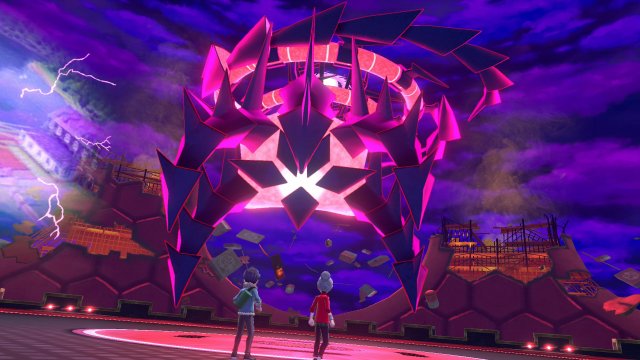 Walkthrough
After reaching the top of the Energy Plant with Hop, you will immediately notice that Leon has subdued Eternatus, to the point where Leon will attempt to capture it. However, after breaking out of the Poke Ball, Eternatus will be too much for Leon to handle. It will then be up to your character to battle Eternatus, which is a dual Poison / Dragon Type Pokemon. (It won't be able to be captured during this Encounter.) Eternatus will be at Level 60, knowing the moves Cross Poison, Dragon Pulse, Flamethrower, and Dynamax Cannon.

After defeating Eternatus in this battle battle, it will absorb enough energy to Dynamax, officially changing into its Eternamax Form. When in this form, Eternatus has the highest Base Stats in the entire World of Pokemon. Because of this, it must be faced in a Max Raid Battle. Hop will immediately team up with your character to battle Eternamaxed Eternatus, but your Pokemon Attacks will do nothing to Eternatus for the first three turns of the Raid Battle. It is then that Hop will suggests using the Rusty Sword and Rusty Shield, and after both of you bring them out, Zacian and Zamazenta will appear. The two Legendary Heroes of The Galar Region will then team with you and Hop in order to take down Eternatus.

When in its Eternamax Form, Eternatus will remain a Poison/Dragon Type Pokemon. It will also continue to be at Level 60, still knowing the moves Cross Poison, Dragon Pulse, Flamethrower and Dynamax Cannon. But, as mentioned, Eternatus will receive an astonishing 435 Point Boost to its Base Stats Total when in its Eternamax Form. It will take the help of Hop and both Cover Legends to defeat Eternamaxed Eternatus, but after it has been defeated, you will earn the chance to capture it. (Eternatus is a guaranteed capture.)
Next Page
Galar Region Championship
Previous Page
Chairman Rose Battle
Top of
Guide
Guide Menu
Verdict:
Very Helpful OK Not Useful
Anything missing from this guide?
ASK A QUESTION for Pokemon Sword and Shield