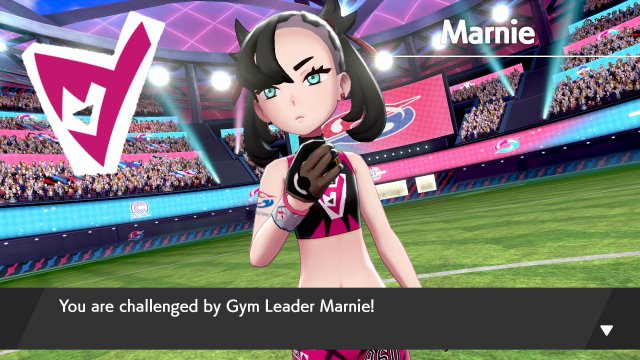 Marnie is a Minor Rival found in Pokemon Sword & Shield. She, like your trainer, will take on the Gym Challenge in hopes of becoming the next Galar Region Champion. Marnie is from the town of Spikemuth, being the little brother of Piers, the Spikemuth Gym Leader. Since she is from Spikemuth, she has developed a fan base with Team Yell (since they also reside in that same town). Even though it is against her wishes, Team Yell will look to do all they can to help Marnie become the next Galar Region Champion, even if that means causing a whole lot of mischief.

As you progress through the Main Story, you will run into Marnie every now and then. On a couple occasions that you do, you will even face Marnie in battle. The two of you will be neutral to one another when you first meet, but as you Encounter each other more and more and face each other in battle, you will each earn more respect towards one another. Marnie will even respect your trainer enough to help you sneak into Spikemuth so you can challenge her brother, the Spikemuth Gym Leader.

After defeating Piers in your Spikemuth Gym Battle, you will learn that Piers would like to retire from being a Gym Leader and wants Marnie to become the new one for Spikemuth. However, Marnie doesn't want to be the Spikemuth Gym Leader, and declines the offer for now. Her dream is to become the next Galar Region Champion, and there would be no sense in becoming a Gym Leader since she would be higher on the ladder than one if she achieves her goals.

Eventually, both your trainer and Marnie will make it to the Semi-Finals of the Champion Cup. Unfortunately, however, you will face each other in the first round, and you must defeat her in order to continue onward. Even after losing, Marnie doesn't become sore. Instead, she'll even help your trainer and Hop make it up Rose Tower to reach Leon and Rose. She'll even join you in the Locker Room during the Champion Cup Finals, expressing on how she is both cheering and counting on you to win it all.

After your trainer becomes the next Galar Region Champion and the Main Story concludes, Marnie will ultimately accept her brother's offer and will become the new Gym Leader of Spikemuth. She can be found and battled in Spikemuth on a daily basis after this, as she insists on training against you in order to be the best Gym Leader possible. She will even be one of the possible participants should you look to rematch the Champion Cup at any given time.

Later on after defeating the Crown Tundra DLC, Marnie will be a participant at that Galarian Star Tournament. Furthermore, after defeating both the Isle of Armor and Crown Tundra DLC Packages, Marnie's Champion Cup Rematch Pokemon Team will see a bump in their levels.
Next Page
Who Is Bede?
Previous Page
Who Is Hop?
Top of
Guide
Guide Menu
Verdict:
Very Helpful OK Not Useful
Anything missing from this guide?
ASK A QUESTION for Pokemon Sword and Shield

Comments for Who Is Marnie?