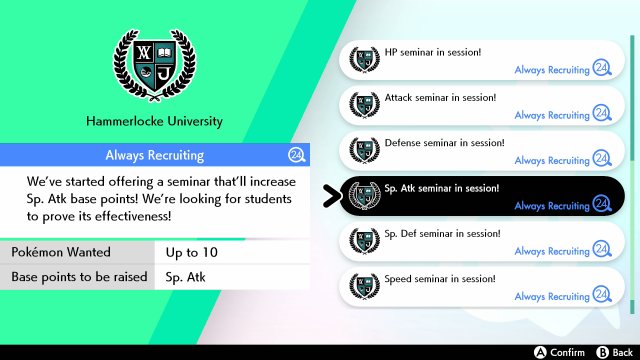 Even though the most popular way for players to EV Train a Pokemon is simply by defeating loads of Wild Pokemon, there are actually much easier ways to do in Pokemon Sword & Shield. The first is that of using Vitamins. In previous Mainstream Pokemon Games, there was a limit on how many Vitamins could be used on a Pokemon for each Base Stat Category; however, that is no longer the case. [b[Now, players can use up to twenty-six of any one type of Vitamin on a Pokemon to fully maximize its Effort Values for that given Base Stat Category![/b]

Furthermore, players can send their Pokemon to do Poke Jobs in order to gain Effort Values! Each Effort Values Task will boost a certain Base Stat Category by +96 Effort Points if said Pokemon is left to complete the task for an entire day. This is increased to +128 Effort Points if a Pokemon also has PokeRus! If a Pokemon has PokeRus and is holding the corresponding Power Item and is left to complete a Poke Job for an entire day, it's Effort Values for that specific Base Stat Category will be fully maxed out!
Next Page
How To Farm EXP?
Previous Page
How To Check A Pokemon's Effort Values?
Top of
Guide
Guide Menu
Verdict:
Very Helpful OK Not Useful
Anything missing from this guide?
ASK A QUESTION for Pokemon Sword and Shield