Best Character in Cadence of Hyrule 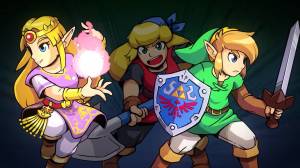 Best Character in Cadence of Hyrule
At the start of the game once you have completed the basic tutorial you will see Link and Zelda sleeping in beds, they will be visible through portals to another dimension. As Cadence you must now choose one of these characters to begin your venture into Hyrule. There is no best character in Cadence of Hyrule as both Link and Zelda play pretty much the same. The only difference between the characters is that Link has a spin attack and shield, while Zelder has an ethereal block and a fireball. Both characters are able to use the same weapons and items that are found in the game so there is no advantage there in selecting one of the characters over the other. What does differ though is where you start the game. If you select Link you will begin the game inside his house which is located in the grassland area of the map. While Zelda on the other hand begins the game by leaving Hyrule Castle as her father is put to sleep.

As you progress through the game you will eventually come across the character you didn't select asleep in a house in Kakariko Village. You will though have to wake them up which is achieved by obtaining the Hibiscus Potion which is found in the crypt underneath the graveyard. Once you have managed to awaken the character you will be able to switch freely between the two characters at any Sheikah Stone. Once you return back to Hyrule Castle at the end of the game you will be required to use both characters anyway so at the start of the game it's more of a case of which character do you want to play as first?

Check out our Cheats, Tips and Strategy page to learn how you can progress through the game easier.