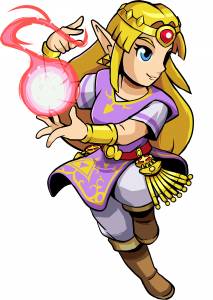 Zelda Spells Guide for Cadence of Hyrule
If you decide that you want to play as Zelda in Cadence of Hyrule you will have access to a couple of unique bonuses which come in the for of two incredibly powerful spells which you can use very early in the game. These two spells are Din's Fire and Nayru's Love and they can be used to block and deal damage. This Zelda Spells Guide will explain each of them in detail.

Nayru's Love
This spell is a defensive barrier that will enable you to block or deflect projectiles back at enemies. Casting Nayru's Love early will lead to a block and casting it when the projectile is almost about to hit you will result in you deflecting it.

Din's Fire
This spell is a ranged fireball that you cast and move on beat with the music. It basically works the same as any other item you use in the game. The advantage Din's Fire has is that the spell allows you to hit enemies on diffent elevations which you are unable to do with a spear or dagger. This makes Din's Fire particularly effective for taking down ranged enemies that have the high ground.

Check out our Best Character Guide to learn what the differences are between Link and Zelda in Cadence of Hyrule.

What is the difference between Link and Zelda?

Anything missing from this guide?
ASK A QUESTION for Cadence of Hyrule