ADR iP
Add Stuff / Ask Questions
Home Guides Wizards Unite
Thank you for printing this page from www.SuperCheats.com.Remember to come back to check for updates to this guide and much more content for Wizards Unite

How to Defeat Confoundables in Wizards Unite

SHARE
Next Page
How to Use GreenhousesPrevious Page
How to Get Free Gold
Last Updated: Jun 25th, 2019 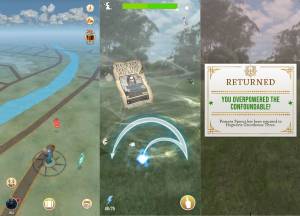 How to Defeat Confoundables in Wizards Unite
One of the most important parts of the game is finding Foundables and defeating the Confoundable that protects it. Confoundables take the form of various magical circumstances, these can be anything from Hagrid being caught in a spider’s web to a copy of The Daily Prophet being trapped in a cyclone. The first thing you need to do is find a Confoundable on your map, they will be represented by a floating discs with diffent symbols. Each of these floating discs is called a Trace and houses a Foundable that needs to be saved. This How to Defeat Confoundables in Wizards Unite guide will tell you how this is done.

Once you tap on the Trace your encounter screen will open and you will begin your attempt to return the Confoundable. At the top of the screen you will see a Threat Level which represents the level of difficulty, the higher the difficulty, the harder it will be to return the Confoundable. To do so you must search for the Foundable which is basically moving your phone around until you can line up the stars you see on screen over the Foundable. If you tap on the stars when they turn blue the battle will begin. A screen will now appear which will have a glowing blue symbol in the middle, this is the Spell Rune and this shape represents what you need to trace in order to cast your spell. You now need to trace the rune in the direction of the arrow with your finger, the faster and more accurately you are able to do this the more effective your spell will be which will increase your chances of winning the battle.

The Confoundable will likely try to resist your attack, when this happens you can use potions to boost the efficiancy of your spells. It is advised that whenever possible you try to save your potions for more complex challenges, such as oddities. As long as you have the Spell Energy you can try multiple times to defeat your enemy. You can view the state of your Spell Energy at the bottom left of your encounter screen. After you successfully return a Confoundable, you will be rewarded with XP and tokens that match the Foundable - Magical Beast, Dark Magic, and Curiosities - that help you level up your Profession later on in the game. You will also be given the opportunity to add the Confoundable to your Registry. If however you have already returned that type of Confoundable before, the Registry animation will skip as the Confoundable has already been registered.

Check out our How to Get Free Spell Energy to find out how you can get this essential resource for casting spells.


Next Page
How to Use GreenhousesPrevious Page
How to Get Free Gold
Top of
Guide
Guide Menu
▼ CommentsVerdict:
Very Helpful OK Not Useful

How do you get Rune Stones?
Is Wizards Unite free to play?
How do you unlock Portmanteaus?

How do you find Runestones?
How many Portkeys can you unlock at any one time?
How many professions are there?
What are the professions?
Anything missing from this guide?
ASK A QUESTION for Wizards Unite

Comments for How to Defeat Confoundables