PC PS4 SWIT XOne
Add Stuff / Ask Questions
Home Guides Team Sonic Racing
Thank you for printing this page from www.SuperCheats.com.Remember to come back to check for updates to this guide and much more content for Team Sonic Racing

How to Unlock Characters Guide in Team Sonic Racing

SHARE
Next Page
How to do a Boost StartPrevious Page
Choosing a Racer Guide
Last Updated: May 30th, 2019 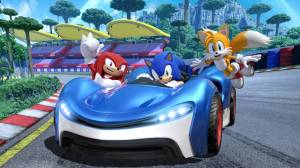 Unlock Characters Guide for Team Sonic Racing
There are a total of 15 characters on the Team Sonic Racing rooster. Not all of these characters though are available from the start of the offline story-based single-player Team Adventure mode. At the start of this mode the only characters that are available are Sonic, Tails, and Knuckles. Also, in the first few races you will only be racing against Amy Rose, the Chao, and Big the Cat. This 'How to Unlock Characters' Guide will tell you how you can access the rest of the characters.

To unlock the complete roster of characters in Team Adventure mode you simply need to keep playing through the story. As you pass into new Zones you will unlock a new team of characters to race against. These new teams will join those already unlocked, making the game more difficult as you progress. The hardest team to get because the characters are unlocked in the later stages of the game is the villain team which consists of Dr Eggmn, Metal Sonic, and Zavok.

Check out our Choosing a Racer Guide to make sure you pick the right character for your play style.


Next Page
How to do a Boost StartPrevious Page
Choosing a Racer Guide
Top of
Guide
Guide Menu
▼ CommentsVerdict:
Very Helpful OK Not Useful

Is it worth ramming into opponents?
How is your final position determined?
How many characters are there altogether?
How do you get a starting boost?
What is the hardest team to unlock?
How many Credits do you get for a race?
How do you add mods to your kart to customise it?
Anything missing from this guide?
ASK A QUESTION for Team Sonic Racing

Comments for How to Unlock Characters Guide