PC
Add Stuff / Ask Questions
Home Guides Monster Train
Thank you for printing this page from www.SuperCheats.com.Remember to come back to check for updates to this guide and much more content for Monster Train 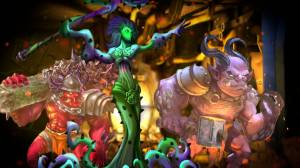 Armor
Armour is extra health that goes on top of your units and remains there until it is either hit off by damage or the battle has ended. You will be able to regain lost armor by healing or Regen.

Artifact
Artifacts are ongoing effects that offer all kinds of bonusese which will help you during battles. These include extra Capacity and Ember to granting specific unit types bonus keywords.

Ascend
Ascend puts the units affected up one floor on the train. This does not work for bosses.

Burnout
Units with Burnout die once their Burnout counter reaches 0. Extra Burnout is best added to your units which already have it.

Capacity
The Capacity of each floor is measured by the little yellow orbs. You will only be able to play units on a certain floor if there is enough empty Capacity for them to take up. You can check the Capacity of your unit by looking at the top border of their card.

Consume
Spells with Consume can only be played one time per battle. Once a spell with Consume has been played it will be removed from your deck until the next fight. This can sometimes be useful as it enables you to thin out your deck for more useful cards.

Damage Shield
Damage Shield negates one instance of damage you recieve per stack. To minimise friendly deaths make sure your units are lined up.

Dazed
Dazed units miss their next attack. When used against a boss, or enemy with Relentless this effect will wear off after they have missed a single attack instead of taking them out of action for the round.

Descend
This works similar to Ascend but puts the affected units onto the floor below. Only 7 units can be on a floor at a time so you need to be careful that you do not mess up your floor movements. You can overfill the Capacity of a floor with Ascend and Descend, just not the total unit amount.

Eaten
Morsels are special kinds of units that can be generated through various units and spells. Once combat has ended they can be Eaten in order to gain certain buffs to the front-most non-morsel unit which includes extra Health, Attack, or keywords like Lifesteal.

Ember
Ember is basically the mana that is required to play the cards in your deck. The total Ember you gain each turn is shown in the bottom left of the card and the Ember cost is shown in the top left. Each turn you start by gaining 3 Ember, but this can be increased by Artifacts, unit effects and various types of combos.

Emberdrain
Emberdrain reduces the amount of Ember gained at the start of your turn. It decreases by 1 every turn. Emberdrain stacks up quickly so you should avoid getting hit by it.

Endless
When Endless units die they are put onto the top of your draw pile giving you a constant source of value should you require it.

Enhance
Enhancing a unit buffs it for the current battle. Once the battle is over the buff is removed.

Extinguish
Extinguish effects trigger when the unit in question dies off.

Frostbite
Frostbite damages an enemy by 1 for every point of Frostbite it has. It then decreases by 1 at the end of the turn.

Frozen
At the end of your turn Frozen cards are not discarded, they can be saved for the perfect opportunity to use them. When you do eventually play the card it loses its Frozen status.

Fuel
Fuel is what powers Inert units and allows them to attack. It decreases by 1 every turn.

Gorge
Gorge effects trigger when a unit eats a morsel. The unit will then gain both the Gorge bonus and the Eaten effect of the specific morsel.

Heartless
Units with Heartless are unable to heal.

Incant
Incant triggers both for enemies and friendlies when you cast a spell on that unit’s floor. Try to only cast spells on the floors of your Incant units and avoiding buffing your foe’s Incant units.

Inert
Inert units can’t attack unless they have Fuel.

Lifesteal
Lifesteal heals a unit for the same amount of damage they hit for. Once it has been used the Lifesteal effect disappears. You can though if you plan ahead stack multiple attacks worth.

Magic Power
Magic Power refers to the amount of damage dealt and health restored by your spells. It does not affect secondary effects.

Multistrike
Multistrike lets you attack multiple times in an attacking phase. It is particularly effective when combined with Quick.

Offering
Offering cards can be cast from your hand. You can get them to go off for free if you discard them from your hand during your turn.

Permafrost
Permafrost cards are given Frozen when they’re drawn. This means they will not get discarded at the end of your turn.

Purge
Whenever you play a card with Purge it will be removed from your deck for the rest of your run. If however you have a unit with Endless and it dies you will be able to get it back.

Pyre
The Pyre is your health total and you will lose if it goes down to 0. It also has an attack value which is triggered when enemies reach it and it will fight it out like any other combat until either your enemy or your Pyre dies.

Pyrebound
Cards with Pyrebound can only be played in the Pyre room or the one just below it. Although these cards are very powerful you need to keep their limitation in mind.

Quick
Units with Quick attack before your enemies do which means they can often wipe out a floor without taking a hit. The downside is their health totals are often low.

Rage
Rage grants your units +2 attack for every stack. It decreases by 1 every turn. Rage is particularly effective when used on Multistrike as it doubles or even triples the effectiveness.

Reform
Unique to Melting Remnant runs, Reform returns a defeated friendly unit to your hand where it's given Burnout 1, +5 attack and health, and costs 0 Ember.

Regen
Regen restores 1 health per stack at the end of the turn, and decreases by 1 each turn. Stacking a load of this up can keep your units alive, but remember it doesn’t last forever.

Rejuvenate
A unit will trigger its Rejuvenate effect when it’s healed, even when the unit is at full health. Different units have different kinds of Rejuvenate effects, from earning Spikes to increasing attack and health.

Relentless
Boss enemies have Relentless and it gives them the ability to attack a floor until either they die or your units all die. They then move up a floor and repeat the process.

Resolve
Resolve effects for a unit trigger at the end of each turn.

Revenge
Revenge triggers when the unit in question takes damage. This can be avoided by keeping them high on health so they can tank the hits.

Rooted
Enemies with Rooted are unable to go up a floor between rounds which can give you an extra turn to deal with them. The can though still attack unless they are Dazed.

Sacrifice
You must kill a friendly unit in order to play a card that requires a Sacrifice. There will be times when this must be a specific type of unit.

Sap
Sap reduces the attack power by 2 per stack, and decreases each turn. This is particularly effective against enemies with Multistrike.

Slay
Slay bonuses come into effect when the unit in question kills an enemy.

Spell Shield
Enemies that possess this ability are able to negate damage spells for as many stacks as they have of Spell Shield.

Spikes
When a unit attacks another unit with Spikes, the attacker takes damage equal to the number of Spikes in a stack. Spikes don't decrease with each turn.

Stealth
Units with Stealth are not targetable with unit attacks. They can attack, but for one turn per Stealth stack, they won’t be hit. They can however still take Spikes or spell damage.

Summon
Summon effects come into play when the unit is summoned.

Sweep
Units with Sweep will damage all the enemies on that floor and not just the one in front ot them.

Unpurgeable
Unpurgeable cards like Deadweight cannot in any way be removed from your deck.

What is the ineteraction between Trample and Sweep?

If a spell has consume and holdover, does it discard and place a new copy on top of your deck?
Anything missing from this guide?
ASK A QUESTION for Monster Train

Comments for Keywords and Effects Guide