PC PS4 SWIT XOne
Add Stuff / Ask Questions
Home Guides The Sinking City
Thank you for printing this page from www.SuperCheats.com.Remember to come back to check for updates to this guide and much more content for The Sinking City

The Sinking City walkthrough and guide

How to get the Shotgun in The Sinking City 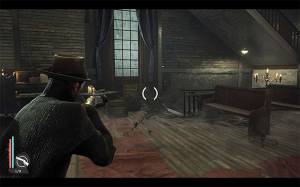 How to get the Shotgun in The Sinking City
The Shotgun is the most lethal weapon Reed can get his hands on in the Sinking City, none of the other weapons come close to this scattergun. To actually obtain the weapon you will first have to finish Quid Pro Quo which is one of the early Investigations. When you complete this investigation you will be given the shotgun as a reward by Throgmorton.

Quid Pro Quo is one of the easiest investigations found in The Sinking City, the objective of the case is to determine who kidnapped professor Harriet Dough. As it is one of the first investigations it has been designed to ease players into the game so you shouldn't have too much trouble completing it and obtaining the shotgun along with ammunition for it and XP. Although there are other weapons in The Sinking City such as the Submachine Gun, Handgun, and Battle Rifle none of them have the sheer damage potential of the shotgun which is particularly effective when attacking groups of monsters placed close to each other.

Check out our Skills Guide page to find out how you can give Reed skills so that he has a better chance of defeating the supernatural creatures of Oakmont.

How do you lose mental health?
How does Reeds health recover?
Where do you get boats from?
When should you use the Mind's Eye?
How do you fast travel?
How do you do side quests?
How many outfits does Reed have?
Anything missing from this guide?
ASK A QUESTION for The Sinking City

Comments for How to get the Shotgun