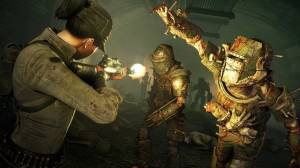 Zombie Army 4: Dead War Healing Guide
It is inevitable that at some point during Zombie Army 4: Dead War you will get injured, this means knowing how to heal yourself very important if you want to survive the zombie hordes that will be constantly attacking you. Check out our Healing Guide to find out the two main ways in which you can heal yourself.

Use a Med Kit
The main way in which you heal yourself in Zombie Army 4: Dead War is by using a Med Kit. You will be able to find Med Kits in safe rooms at the beginning of each chapter, they will typically be inside a crate. To use a Med Kit you simply have to press down on the d-pad and you will be fully healed within seconds. Med Kits are in limited supply and should be saved for when you are a hit or two away from death.

Check out our Best Weapons guide to see which ones we consider to be the most effective at dispatching hordes of zombies in Zombie Army 4: Dead War.