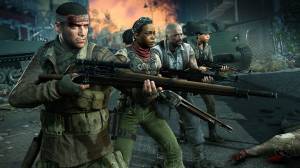 Best Weapons in Zombie Army 4: Dead War
Choosing the best weapon to use in Zombie Army 4: Dead War will depend on your situation. You have several different types from which to choose from and a whole array of upgrades you can add to equip them with mods that will improve their performance. Check out our Best Weapon guide to see which of the three rifles you have to choose from is the best and also which secondary weapon we consider to be the best in the game.

You are given the option of three rifles: Gewehr 43, M1 Garand, and Mosin-Nagant M91/30. When it comes to sniping zombie hordes from a distance the Mosin-Nagant M91/30 is the best of the three at putting down foes quickly and accurately. This Russian rifle can also be upgraded with a variety of attachments that includes Explosive Rounds that let you dispatch elite enemies and the Vampir Scope which will enable you to regain lost health upon a successful Critical Hit.

The best secondary weapon is debateable but we give the nod to to the American pump-action shotgun known as the Trench Gun on the strength of its flexibility. This powerful weapon can take down multiple foes at once and when equipped with the electrified barrel upgrade you will significantly enhance its crowd control effects, without compromising the weapon’s overall damage. This weapon can also be turned into a slug shotgun for greater single target damage if you need it to take down elite enemies.

In certain objectives in Zombie Army 4: Dead Army you will only be able to use your pistol. Of the pistols on offer we consider the German semi-automatic C96 to be the best choice due to the fact that when it is fully upgraded it becomes a flame-spewing machine gun.

Check out our Weapons Guide to see a complete list of all the weapons and mods that are available in Zombie Army 4: Dead War.

112An SOS to some old friends (former members, come chat)