How to Unlock Alternate Costumes for Jesse Faden in Control 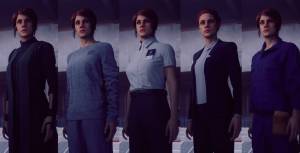 How to Unlock Alternate Costumes
When Jesse Faden first enters into The Oldest House she is wearing an outfit that consists of jeans and a leather jacket. As you progress through the story and it begins to unravel there are alternate costumes you can pick up for Jessie to wear that are more practicle for the task she has to tackle. Our How to Unlock Alternate Costumes for Jesse Faden will tell you everything you need to know about how to get them.

Candidate P7 Costume
Once Jesse has met Dylan, her younger brother for the first time she will be sent to the Prime Candidate Program in the Containment Wing where you will be able to explore the P6 and P7 rooms. When you explore the P7 room you will find this alternate costume which is basically a drab workout outfit.

Office Assistant Outfit
The professional Office Assistant costume is worn by Jesse in a dream sequence towards the end of the story. It becomes unlocked after completing the game. This outfit can be worn at any time.

Janitors Assistant
Early in the game Jesse meets the janitor of The Oldest House who refers to Jesse as his assistant and gives her various side missions to complete. This side missions can be picked up by periodically by returning to the cork boark in the Janitor's Office. Once all five are complete, a sixth mission, 'Take a Break', will be unlocked. When you complete this quick mission you will unlock the Janitor's Assistant outfit. This will be the final costume you unlock.

Check out our How do you get New Skills page to find out how you can equip Jessie with new abilities to help her in her battle against the The Hiss.

What are the best skills to develop first?

How do you craft mods?
How do you identify things you can interact with?
What rewards do you get for completing Bureau alerts?

Anything missing from this guide?
ASK A QUESTION for Control

Comments for How to Unlock Alternate Costumes for Jesse Faden