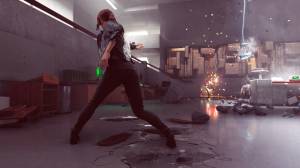 Best Ability Upgrades in Control
In order to get new abilities in Control for Jesse Faden you will need to have a certain amount of skill points as it is these which are used to buy ability upgrades. Skill points can be obtained through some level advancements and by completing various activities during gameplay. Our How do you get Ability Upgrades will tell you everything you need to know.

· Best Ability Upgrades
Ability upgrades are the 'skill tree' of control and as you progress through the game you will be awarded upgrade points that can be spent on enhancements for your statistics. Ability upgrades are totally different to mods, they are tiered and can only be unlocked by visiting a control point and not needing resources to craft like mods makes them the fastest way to enhance Jesse's capabilities. Skill points are not easy to come by in Control which means you must prioritise which upgrades you want and focus on getting them.

As you spend skill points a progress bar will fill at the bottom of the upgrades page and when a level is complete you will earn a bonus. The first level of unlocks will give you an additional weapon form slot, while the second two will both add another personal mod spot. Make sure that the ability upgrades you fill them with are those that best suit your play-style.

Listed below are what we consider to be the best ability upgrades in Control.

Health:
Health upgrades are vital in Control and each tier you unlock will give Jesse additional total health. A health-focused mod can be removed if you have enough unlocked here.

Energy:
Energy is used for everything from evading to throwing objects and every little bit will help Jesse defeat enemies in fights.

Launch:
Spending time on this ability increases the amount of damage your Launch ability does. It is crucial to focus on this early, as it will allow you to kill weaker enemies without needing your gun as a follow-up attack. An optional unlock will also let you throw missiles back at enemies.

Seize:
Spending skill points on this ability increases the amount of time an enemy will be under your control. This is a useful ability to have as it can take the pressure off of Jesse in a hectic fight.

Check out our What are Jessie Faden's Abilities guide to find out what her supernatural powers are.


Next Page
How to Unlock Alternate Costumes for Jesse FadenPrevious Page
How to Unlock Telekinesis
Top of
Guide
Guide Menu
▼ CommentsVerdict:
Very Helpful OK Not Useful
Anything missing from this guide?
ASK A QUESTION for Control