ADR iP
Add Stuff / Ask Questions
Home Guides Age of Z
Thank you for printing this page from www.SuperCheats.com.Remember to come back to check for updates to this guide and much more content for Age of Z

Age of Z walkthrough and guide

SHARE
Next Page
Commander SkillsPrevious Page
Building Guide
Last Updated: Jun 9th, 2020
· Tower Defense Tips
I'm a huge fan of Tower Defense games, and it was quite a surprise to see a real Tower Defense game within Age of Z. Getting through the Tower Defense levels is essential to complete the quest storyline and get the associated bonus with that, as well as the free rewards and bonuses you get from completing each level. Check out our Tower Defense tips below to help you out if you are having trouble getting 3 stars in the early levels.

You really want to be looking to complete each Tower Defense level with 3 stars, while we could offer help for each individual level, it's best that we talk you through the basics of how to set up a good Tower Defense strategy on Age of Z. 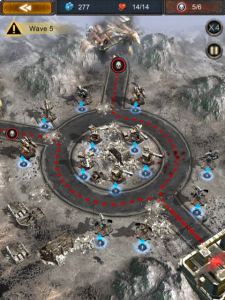 The initial Tower Defense levels are quite easy, and you start off with being able to use 4 different weapons, each one does something slightly different.

Machine Gun Tower
This is a basic tower, but really good in the early levels, it shoots at a single unit but at a relatively high damage

Rocket Turret
This is a great tower for hitting multiple enemies at the same time, but it is slower than the Machine Gun Tower and deals less damage.

Laser Tower
The Laser Tower is incredibly strong but will only hit one enemy at a time, it's attack starts slow and relatively weak, but the longer it attacks a single opponent the stronger the more damage per second it deals, so it is really good against the bosses and stronger enemies. The problem is it may not always target those enemies when they are within a large group.

EMP Tower
The EMP Tower deals very little damage, what it does is that it will slow down a group of enemies therefore allowing your other towers to target them group for a longer period. These are useful when placed correctly, but you certainly wouldn't want too many of these as you definitely need a lot of fire power to get through each level.

Zombie Path
Pay attention to the path of the Zombies, you'll need to post your turrets according to the route that your zombies take. Focusing your strongest towers at the section that most zombies will cross.

Upgrade Towers
Remember to upgrade your Towers, each tower will be upgradable to a different level according to your progress in the game. 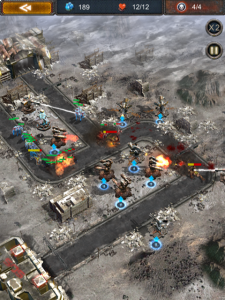 Remember to Upgrade Your Towers
Battle Power Bonus
As well as upgrading your towers while playing the Tower Defense rounds, you can also get global bonuses for each tower type which will affect all the towers of that type from the moment they are placed.

Some rounds you may need to try again to work out which tower combination is best according to the waves of enemies that spawn from the towers. Take note of which enemies may be getting through and adjust accordingly.

If you are having problems with lots of very fast enemies then probably you need more machine guns and rocket turrets, maybe an EMP tower to slow down the enemies would be helpful too.
Next Page
Commander SkillsPrevious Page
Building Guide
Top of
Guide
Guide Menu
▼ CommentsVerdict:
Very Helpful OK Not Useful
Anything missing from this guide?
ASK A QUESTION for Age of Z