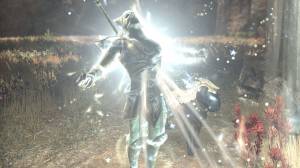 Skyshard Locations Guide for The Elder Scrolls Online: Elsweyr
In total there are 18 hidden Skyshards that can typically be found in Delves and Public Dungeons in Elsweyr. A beam of light pierces the sky above them whenever you are close to one. You will find 10 Skyshards out in the open or above ground, 6 in delves, and 2 in public dungeons. It is advised that unless you have high Champion Points you consider tackling the public dungeons as a group as they will be more difficult if you attempt to do them solo. Check out our skyshard Locations Guide for The Elder Scrolls Online: Elsweyr to learn where you can find them.

#2 - In the ruins where Poachers Prowl
On the western side of Northern Elsweyr, The Prowl is south of Star Haven Wayshrine. If you follow the main road south from Riverhold you will find the collectable amongst some ruins and a tall tree.

#3 - At the creek's end, where shadows dance
The creek you are looking for is northeast of Shadow Dance Striking Ruins. You will find it on the east side where the creek ends.

#4 - In a cart among Rimmen’s canes
The largest hub in the third chapter is Rimmen. It is found in the northeast corner of the map. The cart that has the skyshard inside can be found in the cane fields around the settlements western entrace.

#5 - In a shattered crate beneath the Stitches
The Stitches' Wayshrine hub is found just to the west of the map's centre. If you search the gorge below and to the east of this area's many bridges you will find the skyshard in a destroyed crate.

#6 - In a hidden cave beneath the Moon Gate of Anequina
The Sunspire Trial appears on your map from the beginning, and the Moon Gate of Anequina is on the other side of it on the main road if you follow it west. When you get to the locked entrance of the Striking Locale, turn left and hug the wall until you find the skyshard in a cave guarded by wolves.

#7 - Overlooking the buzzing hives of Merryvale farms
You will reach the Merryvale Farms by heading east along the main road from the Sunspire Trial. Head uphill toward the Fragrant Moons Plantation Gate and turn right to take you to the skyshard.

#8 - Behind a burned out farmhouse
Look for the burned out house that is on a farm west of the Tangle, it is hard to miss.

#9 - In the Shadow of a dragon’s Wings
From the southwestern spot of Cicatrice which is southwest from The Stitches Wayshrine head east to two stone pillars in the hills.

#10 - On the ridgeline overlooking Ashen Scar
North of Orcrest – the massive Public Dungeon located at the centre of the map – is a crossroad, and north of that is a path with a rocky overpass above it. Follow the trail and bear left and fold back on yourself to get the shard overlooking the Ashen Scar.

#11 - In The darkest depths of Orcrest, where all pipes converge – Orcrest Public Dungeon
Return to Orcrest, then head into the Dungeon. First, get to the sewer entrance: from the entrance, head straight forward and then turn right, hugging the outer wall until you find it with wooden doors closing it off. The skyshard is in the centre of the Orcrest Depths that follow.

#12 - On an altar, deep within the Rimmen necropolis – Rimmen Necropolis Public Dungon
There is a crossroads southwest of Rimmen which if you turn right at will lead to the Rimmen Necropolis Public Dungeon. Head inside and towards its northeastern corner. The room you want has two large animal statues in it. In the northeastern part of this room the skyshard’s skill-boosting power can be absorbed.

#13 - On an unsteady ledge, buffeted by the desert wind – Desert Wind Caverns Delve
Head northeast from The Stitches Wayshrine toward a mountain range that will give you access to the Desert Wind Caverns Delve. There you can see the skyshard straight away on the ledge to the right. You will not be able to climb up to it, you need to bear right past it and take the entrance at the back of the main room and keep heading right until you get back round to the first room.

#15 - At the mouth of a cave, in an ignoble abode – Abode of Ignominy Delve
Head west from Riverhold to reach the Ignomity Delve. Once inside, head south to its largest room. You will find the skyshard amongst some ruins and blue flora.

#16 - On an oil-slick island in Darkpool Mine – Darkpool Mine Delve
To get this skyshard you need to head north from the Scar's End Wayshrine so you can access the Darkpool Mine Delve. In the central chamber with two kneeling Khajiit statues, the hidden item is on a little island atop the oily waters.

#18 - Protected by the armored guardians of the serpent tomb – Tomb of the Serpents Delve
This dungeon is cut into the mountains on the northern side of the map. The Serpent's Tomb Delve can be found between Sandswirl Manor and Hill of Shattered Swords. Bear left and take every left turn until you get to the fourth room, which will have a minotaur in the centre of it and four large pillars.

Check out our How to Slay a Dragon Guide to find out what the best strategy is for killing these huge winged creatures that are terrorising Elsweyr.


Next Page
How to Slay a Dragon GuidePrevious Page
Walkthrough, Guide, Strategy
Top of
Guide
Guide Menu
▼ CommentsVerdict:
Very Helpful OK Not Useful
Anything missing from this guide?
ASK A QUESTION for The Elder Scrolls Online: Elsweyr