Project Wingman is an indie arcade-style combat flight action game that follows the story of the war set on alternate Earth between the Cascadian Republic and Pacific Federation through a silent protagonist named Monarch, a mercenary pilot. Fight in various missions and game modes ranging from intense aerial dogfights to large scale ground assault in an alternate scorched earth setting. Project Wingman is available on PC. Take a look at our tips to get help in the game. 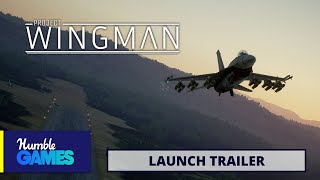 Make sure you save the money you earn in the game as Project Wingman gives you access to progressively better planes as you progress throughout the campaign. Initially you will be given T-21 and T/F-4 trainer planes, and they will suffice for the first few missions. After that you will need to invest in a better plane which you will be able to afford. It is not until you reach Mission 8-9 that the planes start to become really expensive, so it is recommended that you try and save up as much cash as possible for when planes such as the F/S-15 and SK.37 become available for purchase as they will make the later missions in the game easier.
Take a look at our Project Wingman Walkthrough and Guide to get additional help in the game. This includes a beginners guide, unlockable aircraft along with their weapons and stats. We also have walkthroughs to help you with each of the individual campaign missions.
One of the best ways to defend your plane in Project Wingman is to use your flares to confuse the tracking of missiles fired at you. Whenever you see a yellow triangle appear on your HUD it indicates where an enemy missile is coming from. All you simply have to do to make the missile it represents disappear is drop your flares. You have unlimited flares, so there is no need to worry about running out of them.

What you need to take into consideration though is that flares have a five-second cooldown timer. When you reach the later more difficult levels of Project Wingman you will should wait until you have multiple missile indicators on your HUD before dropping your flares. If your flares are on cooldown, and you are targeted by multiple missile you will need to go full throttle and turn hard in order to make them break lock and miss.
It is crucial that you always mash the throttle to fly fast in Project Wingman as doing so makes you more of an elusive target, and it is harder for enemy missiles to track you. It also gives your own missiles extra velocity making them more difficult for the enemy to dodge. There is no fuel to worry about, so there is no reason why you should go slow.
Each plane in Project Wingman comes fitted with high fire-rate cannons that hoses bullets at whatever you point them at. These guns are capable of dealing a significant amount of damage so make sure you use them whenever possible. Keeping the stream of bullets the guns fire on the target for a split second will be enough to take it down an enemy plane and keeping it on a battlecruiser or cruiser for a short period of time will cause a significant amount of damage, even destroying the target outright.
If there is a specific plane you want for a certain mission but do not have the funds available to purchase it you always have the option to replay completed missions in order to pocket the extra cash you need. Keep in mind when replaying the missions that the amount of cash you earn is directly proportional to the number of targets you destroy which means you need to focus on trying to rack up the highest score possible.
I don't know whether it's a glitch, I presume it is but I found while playing on the cloud on my series x, as soon as a new plane becomes available, I'm able to sell it even though I haven't bought it, I kept doing this selling the most expensive plane in my inventory, played the next mission and got the more expensive plane and sold that etc. I've now got over 4 million credits and I'm only on the MG-29 plane. I hope this works for people as it has with me.
Project Wingman Questions & Answers
Our Latest Questions
Can you customize your aircraft?
Can I get my own wingman?
Can I sell individual weapons that I donâ€™..
See All Questions
Have a question for Project Wingman?