Vita PC
Add Stuff / Ask Questions
Home Guides Persona 4 Golden
Thank you for printing this page from www.SuperCheats.com.Remember to come back to check for updates to this guide and much more content for Persona 4 Golden 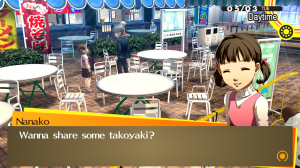 Persona 4 Golden Social Links Guide
The types of releationships you can form with the various characters in Persona 4 Golden through repeated interaction is important. This interaction forms a bond with your characters called a Social Link that enables them to gain new abilities. Check out our Soical Links Guide to find out everything you need to know about this feature.

In Persona 4 Golden you need to grow different types of relationships with the various characters you meet in the game by repeated interaction in order to unlock more powerful Personas, abilities, and is some instances story details as the character in question levels up. The actual interaction itself that enables you to grow Social Links with other characters can be anything from just speaking to them repeatedly throughout the game to something complicated which will need a detailed approach.

You will find that the key in Persona 4 Golden when it comes to growing a Social Link is selecting the right responses in the character interactions you have throughout the game. Having a Persona that releates to the Social Link you are trying to grow will help you significantly. It is therefore important that you keep in mind which Arcana you are trying to level up and which Personas you have at your disposal. Remember also that as you grow your Social Links, your party members will also benefit from the relationship by gaining new abilities.

The list below is an easy-to-reference guide for each Social Link, the associated Arcana, and what you need to do to obtain that Socal Link.

Adachi
Arcana: Jester
How to start: After 5/13, find Adachi at Junes and choose to 'Hang out with Adachi'.

Ai Ebihara
Arcana: Moon
How to start: After you reach Level 4 Strength, speak to Ai at School. If you have Level 3 Courage, skip classs with her.

Chie Satonaka
Arcana: Chariot
How to start: Speak to Chie on 4/18.

Daisuke Nagase (Must join the Soccer Club)
Arcana: Strength
How to start: Join Soccer Club after 4/19.

Dojima
Arcana: Hierophant
How to start: Talk to Dojima on 5/6.

Eri Minami
Arcana: Temperance
How to start: After 4/23, start working at the Daycare Center.

Fox
Arcana: Hermit
How to start: Speak to the Fox at the Tatsuhime Shrine on 5/5.

Hisano Kuroda
Arcana: Death
How to start: After you get your Devil Social Link to Level 4, speak to Hisano at the Flood Plains on a Sunday or holiday.

Kanji Tatsumi
Arcana: Emperor
How to start: After 6/9, speak to the girl next to the stairs at School then speak to Kanji.

Margaret
Arcana: Empress
How to start: Speak to Margaret in the Velvet Room after 5/19 while having Level 3 Knowledge.

Marie
Arcana: Aeon
How to start: Speak to Marie on 4/18 in the Velvet Room.

Nanako Dojima
Arcana: Justice
How to start: Speak to Nanako on 5/3.

Naoki Konishi
Arcana: Hanged Man
How to start: After 6/8, speak with Naoki three times while having at least Level 3 Understanding.

Naoto Shirogane
Arcana: Fortune
How to start: After 10/21, speak to the man in black in the Shopping District, then go back to School and speak to Naoto. Requires Max Level Knowledge and Courage.

Rise Kujikawa
Arcana: Lovers
How to start: Speak to Rise on 7/23

Sayoko Uehara
Arcana: Devil
How to start: After 5/25, start working at the Hospital.

Seekers of Truth
Arcana: Judgement
How to start: Starts on 12/3.

Shu Nakajima
Arcana: Tower
How to start: After 5/25, start working as a Tutor.

Teddie
Arcana: Star
How to start: Speak to Teddie on 6/24.

Yosuke Hanamura
Arcana: Magician
How to start: Speak to Yosuke on 4/16.

Yukiko Amagi
Arcana: Priestess
How to start: Speak to Yukiko on 5/17.

Check out our Classroom Answers guide to find out how to get a cheat sheet of answers for your midterms and final exams throughout Persona 4 Golden.

Next Page
Classroom AnswersPrevious Page
How to Level Up your Character Stats
Top of
Guide
Guide Menu
▼ CommentsVerdict:
Very Helpful OK Not Useful
Anything missing from this guide?
ASK A QUESTION for Persona 4 Golden